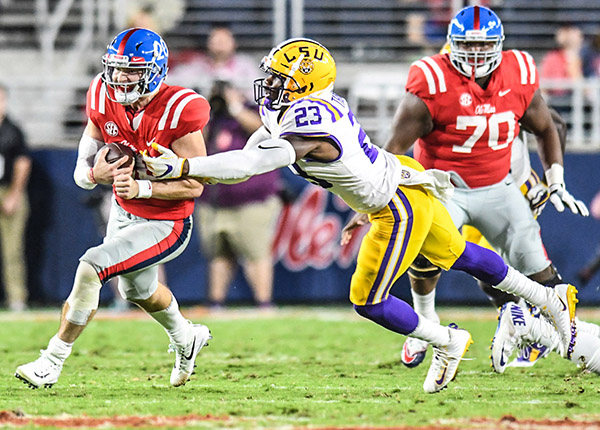 Ole Miss quarterback Shea Patterson (20) runs away from LSU linebacker Corey Thompson (23) during Saturday’s game in Oxford. Patterson, who leads the SEC in passing yardage, tore a knee ligament in the Rebels 40-24 loss and will miss the rest of the season. (Bruce Newman/The Oxford Eagle)

Ole Miss QB Patterson out for the season

OXFORD (AP) — Ole Miss’ loss to LSU on Saturday night was bad enough. It got worse once the game was over.

Ole Miss quarterback Shea Patterson suffered a torn posterior cruciate ligament in his right knee, the school announced Sunday, and will miss the rest of the season.

The sophomore appeared to suffer the injury during the second quarter of the Rebels’ 40-24 loss to No. 24 LSU.

He missed the final offensive drive of the first half, leaving to go to the locker room a few minutes before halftime, but returned to play during the second half with a brace on his right knee.

Patterson finished the game 10-of-23 passing for only 116 yards, with no touchdowns and three interceptions. He was sacked three times.

Patterson is leading the Southeastern Conference in passing yards (2,259), passing yards per game (322.7) and touchdown passes (17).

His likely replacement is junior Jordan Ta’amu, who played in Patterson’s absence against LSU.

Ta’amu completed 7 of 11 passes for 78 yards, and also ran three times for 20 yards. He led the Rebels on a scoring drive late in the fourth quarter and completed a two-point conversion pass to Dawson Knox to pull the Rebels to within 40-24 with 1:51 left in the game.

“(Ta’amu) can do some things with his legs, and I was impressed with him throwing the ball tonight,” Luke told The Oxford Eagle. “He led us on touchdown drives right before the end of the game. At the end of the half, he led us on a field goal drive. I think that gave him some valuable experience where if that is the case (that he has to play), I’ve got a lot of confidence in him.”

The Rebels (3-4, 1-3 SEC) will host Arkansas on Saturday, and offensive coordinator Phil Longo said the offense wouldn’t change much with Ta’amu behind center.

“They’re both very mobile,” Longo told The Oxford Eagle, in comparing Patterson and Ta’amu. “Both of them have the ability to run the football. Both of them throw the football well. So my quick, simple answer would be no. We’ve been in this offense with two completely different QBs and it doesn’t change much anyway. But you enjoy the mobility Shea has, and I think we would enjoy the mobility that Jordan has also.”

Ever since “Pinktober” became a sports trend around the start of this decade, Porter’s Chapel Academy’s football team has embraced... read more