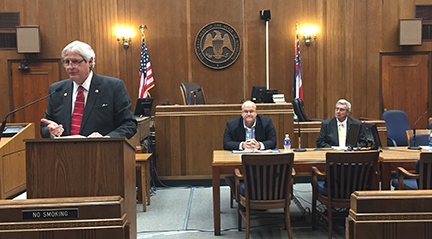 Two candidates in the special election for state House District 54 said they would support a lottery as a means to raise money for the state.

Bonelli, Easterling and Kevin Ford are candidates in a special election to fill the unexpired term of Alex Monsour, who resigned after he was elected South Ward alderman for Vicksburg. The election is Nov. 7.

Ford said the voters should decide whether to have a lottery or raise taxes.

The three candidates were responding to a generic question about property taxes, having a lottery and whether to raise the gas tax to fund infrastructure repairs. It was one of three questions asked during the program. Another question involved having non-violent offenders do community service instead of prison time, while a third addressed improving education.

“Everybody that I know goes across that river to buy a lottery ticket,” Bonelli said. “I support a lottery, because if our residents are going to go there and buy them anyway, why don’t we utilize that money to help the infrastructure, bridges and roads instead of raising taxes.”

He added lottery revenue could also be used to reduce other taxes.

Bonelli indicated he might support a gasoline tax if it would help pay for our roads and bridges.

“I have no problem with a lottery,” Easterling said. “It kind of pains you to see this trail of cars going across the bridge and people playing the lottery in Louisiana.”

His only problem with the lottery, he said, was some people buying tickets “can ill afford to spend that money on something that’s probably not going to pan out. Nonetheless, if they’re going to spend it, I’d rather they spend it in Mississippi.”

Easterling proposed a graduated gasoline tax to fund infrastructure, suggesting a system where the gasoline tax is reduced in increments as gas prices rise, and increases when gas prices drop.

“As a Republican, as a small business owner, I don’t believe in raising taxes in any way shape or form,” Ford said. “If the citizens of Mississippi want to create the funds necessary to fix the roads and bridges then I’m OK with it, but I think the citizens need to vote on the bond measure and then every citizen should decide if that’s what they want to do.

“Legislators do not need to go around creating more taxes. If we want to take more of your hard-earned money, we need to put it to a vote and let you all decide, because it’s your money.”

Neither Ford nor Bonelli addressed the issue of alternative community-based programs for non-violent offenders.

Both focused on creating jobs as a way to reduce crime.

“If you want to fix the problems in Mississippi at their core, we need to focus back on jobs, jobs are the key to growth in the community.”

“I think education and jobs … if we can get jobs it will keep people from stealing and using drugs,” Bonelli said.

“We have people in prison we don’t like or people that we’re afraid of,” Easterling said.

“Would it make sense to get some of these people we have incarcerated in Parchman and other prisons we have around the state and get them out of the prison system and into community-based work? Certainly.

“If these people haven’t committed violent crimes, it makes sense to put them back in the community and work their way out. We spend way too much money incarcerating people. Nobody who goes in comes out better or rarely.

“Community-based programs make a lot more sense than just locking them up for 10-15 years and then produce a product that was worse than when they went in.”

Ford’s comments about the Continental Tire jobs created a small debate over how many jobs would be available when the plant opens. Easterling said the plant between Clinton and Vicksburg would create 4,000 to 5,000 jobs, while Bonelli said Hinds Community College President Dr. Clyde Muse said 250 students from the college would be employed at the plant.

In their opening remarks, all three candidates listed education as a priority and supported the full funding of the Mississippi Adequate Education Program, which is the current funding mechanism for schools with grades K through 12, and has been fully funded twice since 1997.

“If we’re going to be serious about education, we have to fund education,” Ford said.

Easterling said money for education should benefit the teachers and classrooms.

“The key, I think, is not more money; it’s utilizing and using the money and investing it in the classroom,” he said.

“Or school districts need standardized testing to not be changed by the state government,” Ford said. “We have some of the finest teachers in the state; they need our help to get the state off their backs.”

Ford also called for an end to unfunded mandates — state requirements the local schools are forced to fund.

“We need to fund education as much as we can,” Bonelli said, adding he agreed with Ford that the state should set academic standards and stand by them.

The 380 students participating in the school breakfast and lunch programs at Redwood Elementary School will start eating healthier with... read more