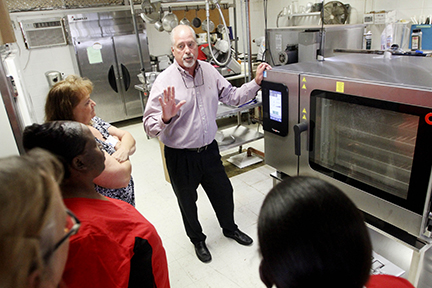 Tim Simmons, with Cleveland, demonstrates to Redwood Elementary kitchen staff how to use one of the two combination oven steamers install at the school thanks to a $15,385 grant from 2011 Nutrition Integrity Greant from the Mississippi Department of Education, Office of Child Nutrition and The Bower Foundation Tuesday. (Courtland Wells/The Vicksburg Post)

The 380 students participating in the school breakfast and lunch programs at Redwood Elementary School will start eating healthier with the installation of two combination steamer/dry heat ovens at the school cafeteria.

The ovens’ purchase was made possible through a $15,385 2017 Nutrition Integrity Grant from the Mississippi Department of Education Office of Child Nutrition and The Bower Foundation. The grant is covering part of the cost of the ovens.

The cafeteria staff went through a training session on operating the ovens Tuesday with Tim Simmons, a representative from the ovens’ maker, Cleveland.

“It cooks using two cycles, steam and hot air,” said Joe Vinson, maintenance supervisor for the district. “They cook very well.” He said the installation of the ovens began about eight years ago, with the first going in at Sherman Avenue Elementary and the second at Bovina. He said all the district’s schools except Bowmar now have the ovens.

“We no longer serve fried foods and we no longer use deep fryers,” Hearn said. “So the children are eating healthier. The hot air settings allow us to get the same crispiness for foods as we would if they were fried. The broccoli is steamed and has a good texture, and chicken nuggets come out crispy, not soggy.

“The food is better and healthier for the children because there’s no grease.”

Once again, St. Alban’s Episcopal Church is inviting everyone to the country for its annual Dinner on the Grounds. The... read more