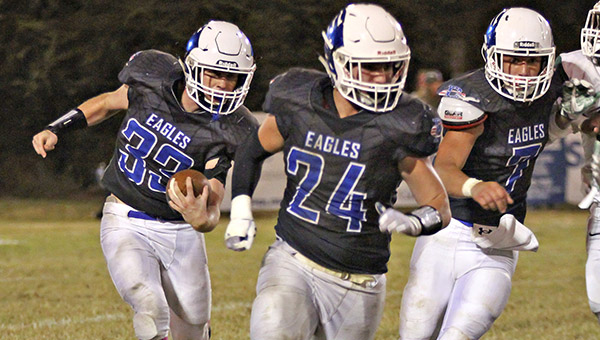 Porter’s Chapel Academy entered its season finale needing a win to earn both a winning record and a berth in the MAIS Class AAA playoffs. Both goals went unmet, but it didn’t seem to take long for the Eagles to realize what they did accomplish.

They finished 5-5 this season — modest by any measure, but still the program’s first record of .500 or better since 2011. Considering the team had won a total of four games combined from 2014-16, it was a huge step forward in the rebuilding process of a once-proud program.

“I was proud of them. They have nothing to hold their head about. I don’t think there were very many people that expected us to win five games,” PCA coach Blake Purvis said. “But it doesn’t matter what people think. It matters what the group on the field believes, and they believed that they had a shot every week. I never saw them quit. I saw them fight to the end. I saw them never give up. I saw them play hard despite some one-sided contests.

“For that, it’s huge for our program to get five wins after what’s been experienced in the last three or four years,” Purvis added. “We owe a lot of that to our seniors, and we owe it to our seniors to be able to build on that and continue to turn this thing in the right direction.”

What the Eagles really learned was how to win and overcome adversity. This year’s seniors had been through some of the darkest times, winning two games in 2014 and then one each in 2015 and 2016. The one victory in 2015 was a forfeit, so they actually went nearly two full seasons without getting to walk off the field a winner.

This season, they routed Columbus Christian 48-0 in the opener and beat Hillcrest Christian two weeks later to have a winning record after three games for the first time since 2011.

The Eagles’ District 3-AAA title hopes ended early, with a loss to St. Aloysius in mid-September, but they rallied to win three of the next four to give themselves a chance at a wild card berth despite losing starting quarterback Tristan Pickering to a season-ending knee injury and several other starters for lesser amounts of time.

“We learned some things about winning this year. I think it’s a very underrated part of the game,” Purvis said. “You have to have guys who know how to win. Largely, we were a group coming into the year that had not experienced that and didn’t know how to fight back and win some games at the end. Despite adversity, I think we had some guys that learned how to win, and I think our younger guys picked up on that and I think we’re going to build on that moving forward.”

A 40-7 loss to Park Place in last week’s season finale finished PCA’s playoff hopes, but everyone seemed optimistic about 2018.

A dozen seniors will graduate, but a number of key players including running back Carter White, Pickering, lineman McKinley Skipper and linebacker Jake Arias are all back. Skipper led the team in tackles this season, White was one the top rushers, and Arias played both linebacker and quarterback after Pickering was hurt.
A talented junior high class that has posted several consecutive winning records is also on the way.

For the first time in a while there is a general optimism for the future of the program. Although this year’s team had a modest finish, there’s also a sense of satisfaction that they laid down a strong foundation for their successors.

“It was the best. We didn’t get the gold, though. We wanted it to be the first winning season in nine years and make the playoffs — a playoff bid that meant something, not a 2-8 playoff bid. But I’m so proud of those guys. My O-Line blocked for me all year. I had more rushing yards than in probably four years combined,” senior running back Glenn Alan Kittrell said. “I have no doubt those guys are going to have a great year next year. I think we left them in a better place than we’ve been left in a while.”

Fifty of the Vicksburg Warren School District’s buses have a new bit of decoration. In honor of National Bus Safety... read more