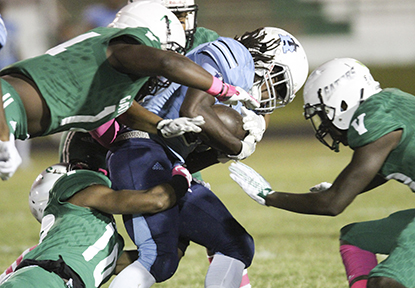 Vicksburg High defenders make a stop on a Ridgeland High ball carrier during Vicksburg’s 2017 Homecoming game. The Gators’ defense has been shutting down opponents and scoring touchdowns on the way to winning three of their last four games. VHS plays at Callaway on Thursday night. (Courtland Wells/The Vicksburg Post)

Vicksburg defense putting points, wins on the board

Coming into the season, Vicksburg High’s veteran-laden defense was expected to be a strength of the team. Few people expected it to be carrying its weight on the offensive end as well.

The Gators’ defense has scored a touchdown in three consecutive games, and also had a safety in last week’s 40-14 rout of Canton. The extra points from that side have been like found money during a recent hot streak that has propelled them to the brink of a playoff berth.

Vicksburg (3-6, 3-2 Region 2-5A) has won three of its last four games heading into a key matchup Thursday night against Callaway (5-5, 3-2) at Newell Field in Jackson.

“It’s one of those things we talked about even early in the year, is do your job and make a play,” Vicksburg coach Lorenzo Breland said. “That’s one of the things we stress on defense, is to get the ball and do something with it. Any time you can turn those turnovers into touchdowns, it gets the momentum going.”

In all, Vicksburg has scored four defensive touchdowns in eight games. It also had a kickoff return touchdown against Clinton, and has had two fumble returns to an opponent’s 1-yard line to set up easy scores for the offense.

Mixed in with the scoring has been a generally excellent effort over the past month. The surge started with a shutout of Neshoba Central in which the Gators forced three turnovers. They then held undefeated Cleveland Central in check most of the night in a 21-14 loss.

The following week, linebacker Nick Anderson provided the game-winning touchdown against Ridgeland with an interception return.

In last week’s win over Canton it only allowed a meaningless touchdown in the fourth quarter when the outcome was no longer in doubt. Canton returned the opening kickoff for a touchdown and then the Gators ripped off 40 straight points — including the safety and a fumble return touchdown by Jo’Mon O’Neal.

After allowing 148 points in their first five games — all losses — the Gators have given up only 56 in their last four outings.

Porter’s Chapel Academy entered its season finale needing a win to earn both a winning record and a berth in... read more