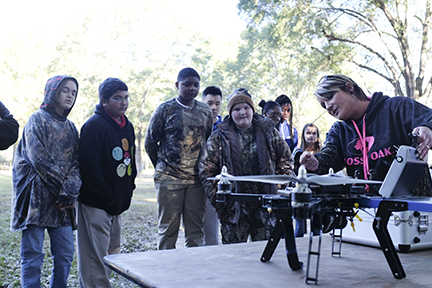 The grounds at the U.S. Army Engineer Research and Development Center became a classroom Wednesday for seventh-grade students from the Vicksburg Warren School District’s Academy of Innovation.

The outdoor classroom was part of the annual Round Robin program presented by ERDC to expose the students to programs and careers available through science, technology, engineering and math programs. ERDC education outreach coordinator Rick Tillotson said the program “is designed to engage the students in STEM activities to inspire them to pursue some type of STEM career.”

“It gives the students a chance to come out here and see the work that we do here at ERDC,” he said. “Hopefully, it will excite them to go college and get a degree as an engineer or scientist, and we hope when they do that, they’ll come back here to ERDC. We’re kind of seeding the field.”

“The academy of innovation is all about STEM,” said Heather Hughes, academy information and communications technology teacher.

“We bring the students here so they can learn about the different things that are done at ERDC using technology. This gives the students an opportunity to see the variety of technologies they have here. We want the students to see the careers available through STEM.”

The yard in front of the ERDC headquarters was covered with a series of tables manned by the center’s engineers, technicians and scientists from the four labs on the ERDC campus — coastal hydraulics, information technology, geotechnical and structures, and environmental — each featuring experiments or examples of their programs.

The students were split into small groups and rotated between the exhibits.

The environmental lab featured unmanned aerial vehicles, or drones, and demonstrated how plants are used to clean the environment; the coastal hydraulics lab had an operating storm surge model to show how surges are predicted; the geotechnical and structures lab featured a small centrifuge and an experiment featuring a small pail of water tied to a string to demonstrate the principal of centrifugal force.

ERDC’s information technology lab featured a deployable satellite communications kit and a magnetic crawler, a small robot. A nearby building featured a demonstration of virtual reality and augmented reality.

“It’s pretty cool,” academy student Laila Brown, who is interested in a STEM career, said. “It’s interesting to see the exhibits and how STEM can be used to help improve things and make things more safe; it shows a lot of solutions to problems.”

Show up, be likable, have a goal and ask for help. These are the four key components the former star... read more