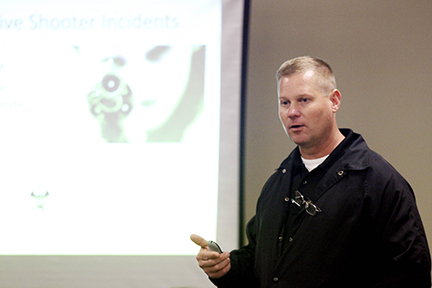 What would you do in an active shooter situation?

Those were Warren County Emergency management director John Elfer’s three suggestions of how to react if you find yourself in an active shooter situation.

Elfer led an active shooter training session at the Warren County-Vicksburg Public Library Thursday morning for library staff and members of the community. The hour-long session focused on how to react if you find yourself in an active shooter situation and how to increase your chance of survival.

The typical response is you have the option to run, hide or fight, but Elfer said you do technically have a fourth option. You could choose to do nothing, although he wouldn’t recommend it.

“You actually have four options,” Elfer said. “You can run, you can hide, you can fight or you can do nothing. I maintain if you do nothing and stay seated in your seat or kneel down in front of the person, you will be killed. Do something. I’m not suggesting you should fight somebody first who’s got a firearm.”

The first option is always to run away and evacuate from the area where the shooting is occurring, Elfer said. That requires being aware of your surroundings and not only getting locked on the exit you can see if front of you. The closest exit may be behind you, Elfer said.

If you have the ability to run, Elfer said to protect yourself first and get to safety. That means leaving the wounded behind and waiting until you are in a safe area before calling 911. If you are able to get out, exit with your hands above your head with your hands open, Elfer said.

“Why do you think police officers need to see your hands with your fingers apart?” Elfer said. “So they don’t have to make a split second decision that you may be a threat to them or someone else.”

The next option is to hide. The best options are to find a place where the door can be locked or barricaded and with only one entrance. Once you are in hiding, silence your cellphone to help keep yourself hidden.

“If you cannot run, get to a hide location,” Elfer said. “Hide out. It should be out of the active shooter’s view. If the shooter can’t see you, he can’t shoot you.”

Your last resort, if hiding or running are not options, is to fight back and attack the shooter, Elfer said.

“As a last resort, take action, do something, fight back, improvise weapons,” Elfer said. “Scissors, chairs, anything you can get your hands on to fight back. They are not expecting you to resist. They are expecting you to just sit there or lie there and get killed. One of the simplest most effective improvised weapons that most people have at their disposable in a public facility is a fire extinguisher.”

Once police arrive, their job is to remove the threat of the shooter as quickly as possible. If you encounter police, get out of their way and follow their directions, Elfer said.

“Their sole mission in life at that moment is to stop any further killing,” Elfer said. “They are there to stop the shooter. They are going to move in the direction where the last known reported location was or if they hear shooting. That is where they are going. You should be doing the exact opposite. They are not going to stop to assist wounded.”

Being prepared for an active shooter does not only include being off aware of your options if you occur. It also includes looking for signs that someone may be planning something or a coworker’s stark change in behavior or appearance.

“They may post something on social media,” Elfer said. “They may make a threat. They may send an email. If you see something. Say something. We need to be encouraging our kids to do the same thing.”

Training sessions like the one offered Thursday are a free service offered by the emergency management department. Their goal to help businesses, churches and other possible targets be better prepared in case the worst happens.

“We have had some turn over,” library director Katrina Stokes said of why she asked Elfer to come train her staff. “I just took over as director about a year ago. I have never been through active shooter training and we have some new staff who has not been through it as well, unfortunately there was an incident two months ago at a New Mexico public library in which two library workers were killed.”

Her biggest takeaway was the need to put a plan in writing in case an active shooter situation occurs at the library.

“What to do and what not to do. It highlighted some areas we need to work on. We definitely need to have an emergency escape plan in place,” Stokes said. “I think it is probably good to have this in writing, which I don’t think we currently do. That is something I plan to fix.”

If you are interested in having active shooter training at you office or church, you can call the emergency management office at (601) 636-1544.

The grounds at the U.S. Army Engineer Research and Development Center became a classroom Wednesday for seventh-grade students from the... read more