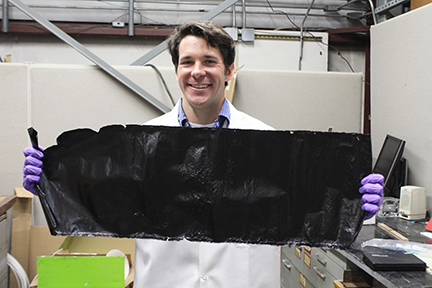 ERDC engineer Luke Gurtowski holds up one of his team’s two foot long graphene oxide membranes they will begin testing soon. Other researchers throughout the world are still restrict to working with membranes only and inch and a half in diameter. (Brandon O’Connor•The Vicksburg Post

Researchers at the U.S. Army Engineer Research and Development Center are working to change the world.

A research team in ERDC’s environmental lab is on the cutting edge of developing a new water treatment system using a mix of graphene oxide and a byproduct made from shrimp shells.

“What I have been working on most recently is developing membrane technologies out of graphene oxide,” Luke Gurtowski, a research chemical engineer at ERDC, said. “Graphene oxide is one of the most heavily researched materials right now in the scientific world. Not just in water treatment, but in a lot of other ways as well.”

“Those are pretty hard to come by,” Gurtowski said. “I think we were one of only two within the environmental lab who actually won awards this year and there are seven ERDC labs. That is a pretty big accomplishment.”

The ERDC team’s breakthrough was the ability to scale the membranes from the inch and a half diameter membranes other labs throughout the world are working at to sheets stretching up to two feet long with the potential of making them as big as needed.

“The reason why the rest of the research world is operating at that small scale is because they are using a certain fabrication technology using another material called a nanodisc. It is a small aluminum disc that crosslinks with the graphene oxide through an assembly method,” Gurtowski said. “The problem is they can’t move them out of laboratory scale. It is important to move it out of the laboratory scale because if you can’t make it big, you can’t use it.”

The ERDC team has developed a method to replace the aluminum disc and instead use a byproduct from shrimp shells called chitosan. Their current testing model is using a membrane the size of a cellphone.

“You can actually mix Chitosan with graphene oxide and if you mix it a certain way you can make the membranes in any size you want just by a process of letting it dry,” Gurtowski said. “It basically does the same function the aluminum has. It gives it a structure and allows you to mold it and make a sheet …  We can make it as large as we want it.”

The project is being funded by the Army. Its intent is to develope an effective method to decontaminate wastewater that’s been used to disinfect soldiers or equipment exposed to biohazards during warfare. The membranes, once their ability to be functional on a larger scale has been proven, could also be used to purify drinking water.

“The thought process is if we can treat that water we can treat any water,” Gurtowski said. “If we can take salts out of water or very small pollutants or radiological pollutants, we can take pretty much anything out and we can do it efficiently, cost effectively and quickly. That is why we are driving this research. Even though it is an Army-funded project right now, it is not limited to the Army.”

Graphene oxide membranes work as effectively as the current “gold standard” for water purification, reverse osmosis, Gurtowski said, but in a much more cost effective way.

“Reverse osmosis is the gold standard, but it is very expensive because you need a lot of pressure to pass it through a reverse osmosis. I am talking 200 psi essentially,” Gurtowski said. “We can get the same performance at much less pressure, 50 psi. The reason why we want to cut down in terms of pressure is that saves a lot of energy.”

The team at ERDC is currently applying for a patent on their method of mixing the graphene oxide with chitosan. The next step is to prove the membrane can work at any size, improve its durability and finalize the method allowing the membrane to work in a spiral-wound cylinder instead of just as a flat sheet.

“Spiral-wound is the way most membrane technologies are used now because you can have large membranes fit into a really small area,” Gurtowski said.

The team at ERDC is tasked with developing the technology, but it will be the private sector’s responsibility to help take the technology to market as usable products. Taking products like the graphene oxide membranes to market is the goal of the planned technology transfer at the Old Mississippi Hardware building in downtown Vicksburg.

“I think it would be huge,” Gurtowski said of having a technology transfer center in town. “Research has to go somewhere and if we can get a better avenue or a better vehicle to be able to get our knowledge or technology transferred outside of ERDC and sometimes outside of the government, it makes it a lot more fulfilling. It is definitely necessary. Research can’t stop at just research. It has to move forward.”