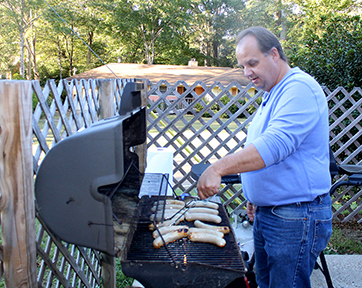 B.B. Lingle turns bratwurst cooking on a grill during the 2016 Germanfest at the Lutheran Church of the Messiah. The church is observing its 30th version of the annual fundraiser. (File•The Vicksburg Post

Lutheran Church of the Messiah to host Germanfest

The Lutheran Church of the Messiah will continue a church tradition begun in 1988 when it holds its annual Germanfest Nov. 4.

The 30th version of the event will take place from 4 to 7 p.m. in Trinity Hall at the church, 301 Cain Ridge Road, which will be filled with the aroma of brats and other German delicacies.

“We get our brats shipped down from Usinger of Milwaukee, Wisc.,” organizer Ruth Osburn said. “We’ve been using their brats since we began. We also presell boxes of brats.”

She said the church usually serves about 100 to 125 brat plates during Germanfest.

Bratwurst plates are $10, and hot dog plates will be available for $5 for people who don’t like brats.

Tickets for the event will be available at the door. There are no advance sales.

Osburn said more than half the meals are take-outs, but people are welcome to eat there.

“We have tea, root beer, soft drinks, or you can bring your own beverage,” she said.

Diners will be able to spice up their brats from a selection of companion foods and condiments.

“We will have a condiments area,” she said. “You can fix it with whatever you want. There’s a table where you can put your own fixings with it; there’s sauteed onions, sauerkraut, spicy mustard, plain mustard … some people like ketchup.

“And we have enticing desserts,” she said, adding the event will feature a selection of homemade pies and cakes.

The Lutheran Church of the Messiah was formed in 1950.

According to the church’s history, the groundwork for the church began in 1949, when the Rev. Kenneth Hoffmann came to Vicksburg as chaplain of the Vicksburg Lutheran Hospital, which had been recently acquired by the Lutheran Church-Missouri Synod.

Hawkins UMC to have ‘Praise in the Parking Lot’ Sunday