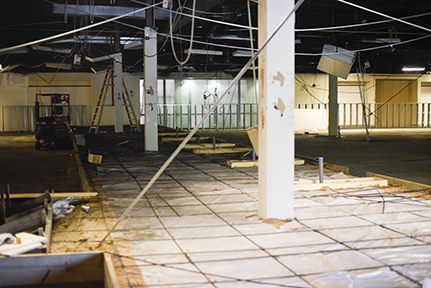 The interior of the old Goody’s clothing store is cleared of debris as workers prepare the interior for a 16-lane bowling alley in July. (File•The Vicksburg Post)

The opening of a bowling alley in the Vicksburg Mall could be delayed until early January, mall manager Mike Carlisle said.

“They (the builders) have been working hard at it these past few weeks,” he said. “There’s been a lot of progress made. I have seen the pictures of what it’s going to look like, and it’s really going to be great for Vicksburg and the community. They’ve got a lot of the build-out done. The main thing they’re still working on is the electricity and the wiring for the 16 lanes.

“The guys who are doing it are really involved and for them, to do it here in Vicksburg is a privilege for us,” Carlisle said, adding workers have hung the dry wall, and the restaurant and the bar area are finished.

Work on the bowling alley, to be called Fun Lanes, began in the old Goody’s clothing store in the mall in February.

The January opening is the second proposed opening for the bowling alley. Operations manager Patrick Belden in July said the anticipated opening was set for late September or early October, and Vicksburg and Warren Central high schools formed bowling teams in anticipation of the alley’s opening. Their season will start Tuesday.

Attempts to reach Belden for comments about the bowling alley were unsuccessful.

At the time, Belden said the work was about 25 percent complete, adding the permit process delayed them and “It is going. It is just going slow.”

When completed, the bowling alley will feature 16 lanes and a restaurant and gaming area. Belden said in July no decision had been made on what the restaurant will be except that there will be a bar included.

Once completed, the bowling alley will be the first for the city since Red Carpet Lanes.

Red Carpet operated on Clay Street near Hope Street for 48 years, before closing in 2003 because of structural problems with the building and a lack of bowlers.

The nearest bowling venue is Indian Lanes in Clinton.

Researchers at the U.S. Army Engineer Research and Development Center are working to change the world. A research team in... read more