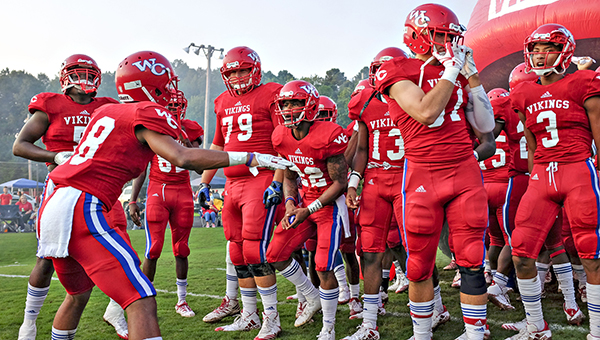 Warren Central football players get pumped up before a game earlier this season. The Vikings will host Starkville in their regular-season home finale Friday at 7 p.m. (Courtland Wells/The Vicksburg Post)

Warren Central all but locked up a playoff berth with its win over Clinton last week.

It’s the “all but” part that the Vikings have to remember. There’s still plenty of work to do.
No. 3 Starkville (9-1, 5-0 Region 2-6A) comes to Viking Stadium on Friday to face Warren Central (6-3, 3-2) in the latest in an endless string of big games in the league.

Warren Central needs one more win — or a Clinton loss — in its last two games to officially lock up a playoff spot. WC would have to lose both for Clinton (4-5, 2-3) to overtake it for the No. 4 seed, but a loss to first-place Starkville would open the door for just such a scenario in next week’s regular-season finales.

“We haven’t clinched yet. There’s a lot of crazy stuff that can happen and we not make it,” Warren Central coach Josh Morgan said. “Our kids know that, and know this is a really big opportunity. We’re still trying to play our best football and build some momentum. This is an opportunity to play, and a big opportunity for this football team.”

Besides locking down a playoff spot, this is another chance for Warren Central to prove it can beat one of the state’s top teams. Of the top five teams ranked in this week’s Mississippi Associated Press Class 6A poll, the Vikings have played — and lost to — three of them, all by a touchdown or less.

Starkville will be the fourth, and if the standings hold they’ll get a crack at the fifth (No. 2 Tupelo) in the first round of the Class 6A playoffs in two weeks. Close losses to No. 1 Pearl, No. 4 Madison Central and No. 5 Northwest Rankin proved the Vikings can hang with the best. Now they get yet another opportunity to show they can beat the best.

Starkville has two state championships this decade, in 2012 and 2015, but Warren Central has not appeared to be intimidated in their annual late-October meetings since the teams became region opponents in 2013.

Starkville has won three in a row against the Vikings, but none were settled until the fourth quarter. Starkville won 35-28 on its home field last season.

“Our kids have a lot of confidence going against Starkville,” Morgan said. “The thing we do have going for us is we’re at home. Our field and fans are tough on opposing teams, and we’re going to need them in an all-out mentality for sure.”

Starkville’s only loss this season came on Sept. 1, a 28-3 setback against Class 5A West Point, the No. 1 overall team in the state. It has won seven in a row since then, yet largely flown under the radar in Class 6A behind undefeated Pearl and Tupelo.

The Yellowjackets have nonetheless seized control of Region 2-5A with their winning streak and can clinch their third region championship in four seasons with a win Friday night.

Four receivers have 18 or more receptions, led by Cameron Hines with 43 for 504 yards and eight touchdowns. Quarterback Malik Brown has thrown for 1,226 yards and 18 touchdowns, while running back Rodrigues Clark has rushed for 914 yards and 13 touchdowns. The defense has posted two shutouts and only allowed 34 points in five region games.

Although others have gotten more press on the state level, Morgan said his team is well aware of what Starkville has done and what it’s capable of.

“We hear about them a bunch, just because they’re in our district. They’re only a year removed from being state champions. They’re not lost to us, I can tell you that,” Morgan said. “They’re a typical Starkville team. Very athletic, a lot of speed on defense, and on offense they have a lot of weapons all over the field. Usually with a team like that, you try to gain an advantage in the kicking game but their kicker is really dang good, too. They have no weak spots. They’re a very, very good football team.”