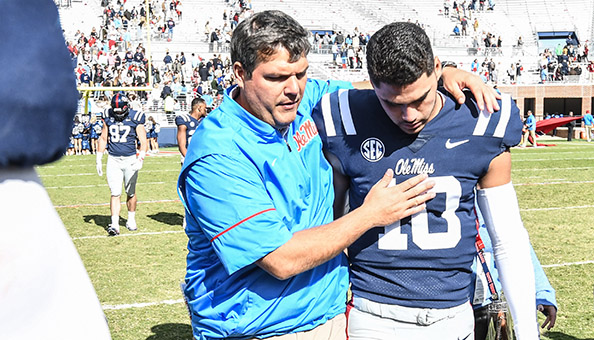 OXFORD (AP) — In an effort to break out of a three-game losing streak, Arkansas coach Bret Bielema said he tried to keep things simple and stick to a mantra of starting fast and finishing strong.

One out of two proved to be enough.

Connor Limpert made a 34-yard field goal with four seconds left and Arkansas rallied from a 24-point deficit for an improbable 38-37 victory over Ole Miss on Saturday.

“Obviously, we didn’t start as fast as wanted,” Bielema said. “But we definitely finished strong.”

The Razorbacks (3-5, 1-4 Southeastern Conference) trailed 31-7 in the second quarter and the Rebels were driving down the field again when Arkansas’ Santos Ramirez stripped the ball from Ole Miss tight end Octavious Cooley and recovered the fumble.

It was the first of two Ole Miss turnovers that would be crucial in helping Arkansas pull within 31-21 by halftime.

“It just takes one play,” Bielema said. “I have been coaching defense and been on that side of the ball for so long, that Santos’ strip-fumble changed the whole momentum, not just for the defense, but for our whole team.”

Ole Miss (3-5, 1-4) pushed ahead 37-28 in the fourth quarter, but a costly fumble on an exchange between quarterback Jordan Ta’amu and running back Eric Swinney was scooped up by Arkansas’ Kevin Richardson and returned 22 yards for a touchdown to make it 37-35.

“We just had to find a way to finish it,” Richardson said. “We never quit.”

Ole Miss had to punt on its next drive and Arkansas methodically drove down the field to set up Limpert’s game-winning field goal. The sophomore missed a 44-yard field goal in the first quarter, but didn’t have any trouble on the game-winner. He hit three practice kicks as Ole Miss burned off all of its timeouts in a futile attempt to ice him.

“I missed one earlier in the game, it tailed a little to the right, but my ball tends to do that. That’s why the offense ran the ball to get the ball to the left hash, which is more comfortable for me. It was a little routine, you get used to it,” Limpert said.

Bielema said the comeback was the result of a few adjustments and hard work. The Razorbacks have won four straight against the Rebels.

Arkansas’ Cole Kelley threw for 189 yards, three touchdowns and one interception. He was cool under pressure during the Razorbacks’ final drive, leading the 12-play, 62-yard charge that resulted in the game-winning field goal.

Ta’amu — who started his first game in place of the injured Shea Patterson — completed 20 of 30 passes for 368 yards. It was the most passing yards ever by an Ole Miss quarterback in his first career start. But his interception and fumbled exchange proved costly.

“He came in there as his first start in the SEC and he did a lot of good things,” Ole Miss interim coach Matt Luke said. “I think a lot of people are going to point to mistakes, but those are to be expected. There is enough blame to go around, they don’t need to just put it on him.”