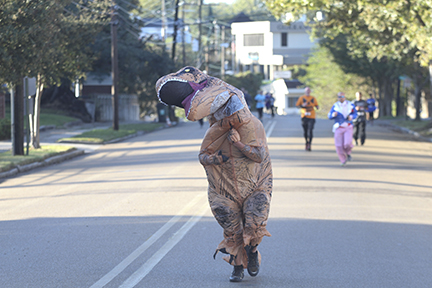 Runners and walkers traveled the 3.1-mile route along South Street in downtown Vicksburg wearing witch, princess and even t-rex costumes.

The event, hosted by Vicksburg Catholic Schools, is a fundraiser for the school.

“All the proceeds go to Vicksburg Catholic Schools to help with operational things at the school,” said Kristi Smith VCS development director.

“Last year it was for our STEM lab, this year it will go to other different operational things at the school just since we are a private school and things like this keep us up and running.”

Runners took off at 8 a.m. and walkers followed close behind. Many runners came to simply enjoy the terrain, work on speed, support the schools or as a part of an organization.

“I came out just to support the local race, I had some friends who came out, but it’s my first time doing this run, it looks like it’s a pretty big production, we were out of town for the other two but this one is really nice,” said Eric Mason, a six year runner.

“The weather was really nice but those cross country and swim team guys were fast though, they were smoking it!”

Organizations such as the Mississippi Track Club, and the Vicksburg Family Development Center were in attendance Saturday along with other runners.

“I’m with the Mississippi Track Club and we do races just about every Saturday and we enjoy going to different towns and meeting new people and just participating with everybody who is ready to be healthy, get in shape or whatever it might be,” said Sonja Dufrene.

“We just love to socialize with our family in the running and walking community.”

The Vicksburg Family Development Center had several runners out on the hilly route Saturday.

“I came here with Vicksburg Family Development. I did the Color Run last time and I just wanted to do the Spooky Sprint,” said Ma’Kaylah Parson.

“Well, I am a competitive runner and I run with God on my side so in my eyes I say that I am running for Jesus,” said Agyepong.

“I want to make a stand so that people see that Jesus gives me the strength to do it.”

The Spooky Sprint brought runners from all over Vicksburg and surrounding areas into town and has had more than 500 participants each year.

“This was the brain-child of Anne Roberson and myself about three years ago, so this is our third annual Spooky Sprint and we wanted to do a run with the Catholic Schools in the community,” said Mindy Giambrone co-director of the Spooky Sprint.

“We decided Halloween would be fun, everyone could wear costumes and it’s just kind of grown from there.”

The Spooky Sprint has been a means of relief, restoration and a reason to run for many participants in the event. It is a local fundraiser for the upkeep of the Catholic school in Vicksburg.

The opening of a bowling alley in the Vicksburg Mall could be delayed until early January, mall manager Mike Carlisle... read more