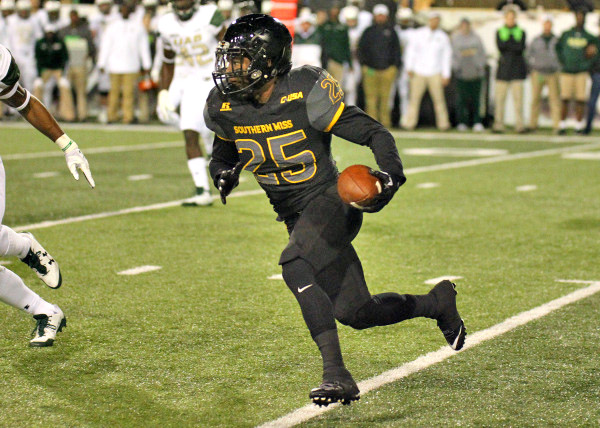 Southern Miss running back Ito Smith totes the ball Saturday against UAB. Smith had 93 receiving yards, most of them on an 84-yard touchdown on the first play of the game, but the Golden Eagles lost 30-12. (Joe Harper/Southern Miss Athletics)

HATTIESBURG (AP) — A.J. Erdely threw for one touchdown and ran for another, rallying UAB in the second half to beat Southern Miss 30-12 on Saturday night.

The Blazers (5-3, 3-2 Conference USA) scored 17 unanswered points after that, on a 25-yard touchdown pass to Hayden Pittman early in the fourth, on a 43-yard field goal by Nick Vogel, and on a 41-yard interception return by Darious Williams for the final score with 35 seconds to play.

“We struggled in the second half. It was evident. Anytime you score zero points in a half and throw a pick-six, it is not a good day at the office, for sure,” Southern Miss coach Jay Hopson said. “We just have to get better the next day. That’s what football is all about. Just didn’t do a whole lot in the second half at all.”

Erdely finished with 208 yards passing for the Blazers. Spencer Brown ran for 209 yards and a touchdown on 33 carries.

Keon Howard threw for 207 yards and a score for the Golden Eagles (5-3, 3-2), who had a three-game winning streak snapped.

The Golden Eagles scored on the first play of the game, as Howard hit Ito Smith for an 84-yard touchdown pass and a quick 7-0 lead, but the PAT was missed and they couldn’t sustain the momentum after that.

Southern Miss went back in front by halftime with two field goals by Parker Shaunfield from 25 and 31 yards, and then Erdely took over in the second half to propel the Blazers to victory.

Smith finished with 129 total yards for Southern Miss — 93 receiving and 36 rushing on 12 carries. Southern Miss only had 81 rushing yards as a team.

“There were some good plays there, but at the end of the day the offense didn’t play well. That’s evident,” Hopson said. “I thought that’s something we just have to be better at, and that’s part of the journey. Go to work, and some days you have those in football, just like in life. You gotta get over it and move on, and that’s what we have to do now.”

The Golden Eagles will step out of C-USA next week to play at Southeastern Conference opponent Tennessee.