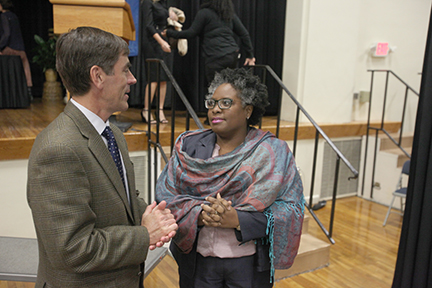 Monday was a day of celebration in Vicksburg.

During a luncheon at Vicksburg Auditorium, the United Way of West Central Mississippi and the city of Vicksburg as a whole officially celebrated Vicksburg’s designation as a 2017 winner of the Culture of Health Prize given out by the Robert Wood Johnson Foundation.

Vicksburg was one of eight communities nationwide, out of more than 200 applicants, selected as a prizewinner for 2017. City representatives officially accepted the award earlier this month in New Jersey, but Monday was a chance for the community to come together and celebrate the award.

“The motivation to apply for this prize comes from not only wanting to change how we see ourselves as a community, but how the rest of the country sees us,” Linda Fondren, who is a member of the Live Healthy Action team, said. “It has been too long and we are frustrated with Mississippi being typecast as poor, unfit and undereducated. There are so many great things going on around our state and here in the city of Vicksburg. This prize means Vicksburg is helping to lead the way to change that conversation.”

Vicksburg was selected in part because of its commitment to education through the Vicksburg Warren School District’s implementation of Leader in Me, the continued emphasis on walking trails throughout the city and the implementation of community healthcare programs by the United Way.

“Health means so much more than simply not being sick. Health means easy and affordable access to healthcare … it means improving neighborhood parks so moms can feel comfortable letting their kids play outside,” Fondren said, “It means building social and emotional skills in students as young as kindergarten and increasing high school graduation rates from 56 percent to 71 percent … It means taking on racial injustice, segregation, discrimination and lack of economic opportunity.”

In a nearly nine minute video produced by the foundation highlighting Vicksburg as a prizewinner, initiatives such as an emphasis on increasing the amount of African Americans walking in the military park, the community garden and the restoration of playgrounds were among the areas of focus, which make Vicksburg a healthy community.

“It was an amazing time to be here on the site visit and see this community come together,” Necole Irvin, the chair of the culture of health prize committee, said. “It was very clear and obvious it was not a one-time thing. It was not them putting on a show for a funder. There was authenticity, there was truth in their relationships and there was an amazing set of work that was happening in this city.”

The luncheon included multiple speeches by members of the Live Healthy Action committee discussing the ongoing initiatives in Vicksburg. Those projects received a major boost going forward when Mayor George Flaggs Jr. announced during his remarks that the city will be matching the $25,000 awarded by the Robert Wood Johnson Foundation for winning the prize.

Fondren said the plan is to use the $50,000 to help leverage other funds to “continue to make the impact we are making now.”

The luncheon was also in part a chance to celebrate the ongoing impact of the United Way’s 19 partner agencies in Vicksburg.

“The United Way and its partnering agencies strive every year to fund and execute programs focused on education, financial stability and health for our community in all walks of life,” Jennifer Grey, the United Way campaign chair, said.

Prentiss volunteers to serve as city rep for United Way