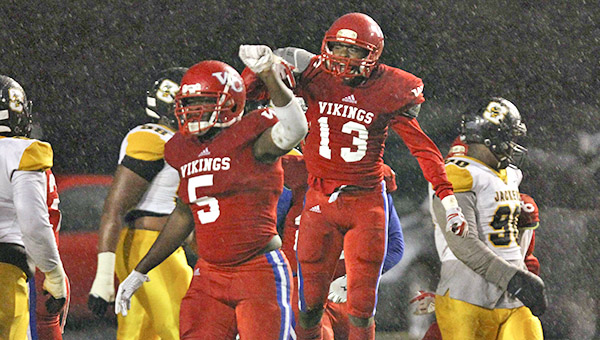 Warren Central's Jeremy Miller, 5, and Jalen Allen, 13, celebrate after a play against Starkville during the game at Warren Central Friday. (Courtland Wells | The Vicksburg Post)

For two months, Warren Central has been trying desperately to “get over the hump” and earn a signature victory against one of Mississippi’s top teams.

It’s had plenty of chances.

First, there was the 28-21 loss to No. 1 Pearl. Then came a 38-31 loss to No. 5 Northwest Rankin, and a double-overtime defeat at the hands of Madison Central. All were decided in the final minutes.

Last Friday against Starkville, the Vikings didn’t let it come down to that. They controlled all three phases of the game against the No. 3 team in the state and earned a 23-0 victory that was equal parts momentum-builder and emphatic statement.

The win not only clinched a playoff berth for the Vikings (7-3, 4-2 Region 2-6A), it shouted from the rooftops that they’ll be a factor once they get there.

“Everybody was sleeping on us since we took a couple of big losses during the season, but coaches told us the defense has to control the game. They were going to come out ready to fire, and we had to be ready to fire, and that’s what we did,” said Warren Central defensive end Damonte Stamps, who had three tackles against Starkville.

Warren Central was actually outgained by Starkville (9-2, 5-1), but came up with enough big plays and defensive stops to remain in control all night.

Warren Central recorded a safety on defense — after the special teams unit downed a punt at the 1-yard line — and recovered a muffed punt at the Starkville 15. The latter play led to a 4-yard touchdown run by Jerrious Stovall that put WC ahead 9-0 early in the second quarter.

Starkville fumbled five snaps in the rainy conditions and lost one. It also turned the ball over on downs five times, including once at the Warren Central 7-yard line. A 21-play drive that spanned the third and fourth quarters ended with a missed 25-yard field goal.

While the Yellowjackets were clearly not on top of their game, Warren Central seemed eternally patient in the foul weather. It played a field position game for most of the first half and took advantage of the two big special teams plays to gain the lead. After the missed field goal it finally seized the opportunity to put the Yellowjackets away, going 80 yards in only two plays — both runs by Stovall — to take a 16-0 lead.

Stovall added an 18-yard touchdown run with just over two minutes left, following another turnover on downs by Starkville. The defense then closed out its second shutout in three games.

“We were patient. We trusted our guys, and our game plan and our kicking game, and it helped us win,” Warren Central coach Josh Morgan said.

Now, the Vikings will have to come through with the follow-up. They go on the road to face Provine in the regular-season finale this Friday, then open the Class 6A playoffs next week.

The playoff matchups have yet to be determined. Warren Central is currently in fourth place in Region 2-6A but could get as high as second depending on this week’s results. A win over Provine, coupled with losses by Starkville (vs. Clinton) and Northwest Rankin (at Murrah) could push them as high as second place.

The most likely scenario, however, has the Vikings staying where they are and going on the road to play No. 2 Tupelo (10-0) in the first round. If they can handle Provine, they’ll take that long trip with a four-game winning streak — and, more importantly, the confidence that they can beat and not just hang with the state’s best teams.

“We’ve been close so many games. We knew if we could just continue to play, which is why the Clinton game (on Oct. 20) was so big. We’ve been better, and been getting better. But that’s two big back-to-back wins, and that’s really good to see,” Morgan said. “You want to get hot at the right time. Momentum and confidence is so important in this game.”

A weekly recap of how players from Vicksburg-area high schools did in college football and NFL games: • Southern Miss... read more