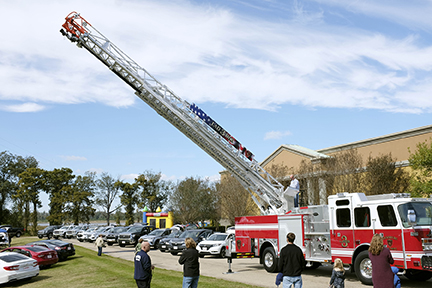 The first occupant of the Vicksburg Fire Department’s Independence 3 Station is already in place.

Ladder 3, the fire department’s newest ladder truck, was delivered Friday and immediately housed at the new station on Berryman Road.

“This is a very functional truck,” Fire Chief Craig Danczyk said. “We put in everything we know we’re going to need and not a lot of things we didn’t need. We had numerous people give us ideas, and we took as many of those ideas as we could, within our budget, to complete this project.”

It’s a combination ladder truck and pumper, with a 78-foot ladder, 500-gallon tank and a pump capable of pumping 2,000 gallons a minute. It provides a third aerial truck for the fire department, which also has a 93-foot platform truck and a 135-foot ladder truck, both nearing the end of their projected service time.

Ladder 3 has LED light panels and an LED light bar across the top on the truck’s front, pullout equipment panels and a storage area for the Jaws of Life, used to remove people from wrecked cars and other entrapment.

The truck also has dual controls for the ladder, with one set on the ladder’s turntable, and another set of controls on the pump operation panel that will allow one person to operate both if necessary. The top of the ladder is painted orange as a safety measure.

It is the fourth truck in the department’s fleet to have an independent front suspension, which ensures a better ride for the firefighters and reduces the amount of shock and wear on the truck.

But one of the truck’s biggest assets sits in its front bumper — a storage area for cross lays, the lines that are deployed when a truck arrives at the fire. Danczyk calls it “a game changer.”

“Typically on every fire truck we have two cross lays and they’re 200 feet each,” he said. “Typically, they’re in the middle of the truck, and on a ladder truck they tend to be high; they’re in an elevated position (and) sometimes it makes it hard to get the lines down.”

“Our guys were very excited about this upgrade. It was a small upgrade, but functionally, it was a tremendous upgrade. They’ll be able to unload the hoses quicker, and at the end of the day, when you’re tired (from fighting a fire) and have to load the hoses, you can do that quick, too.”

Danczyk believes the truck will fit the fire department’s fire protection needs and has a life expectancy of 20 to 25 years.

He said the ladder truck is at the end of its service life, adding the city will have to make decision whether to upgrade it or replace it. A new 135-foot ladder truck, he said, costs $1.2 million, equivalent to the cost of a quint truck and a new pumper.

“This is a 10, because to me there is no waste,” he said. “We didn’t do anything with the truck that was wasteful. Everything had a purpose, everything had a function and we spent the least amount of money we could within reason.”

Danczyk said the truck has gotten good reviews from the firefighters, and from some outside sources.

He said officials with Sunbelt Fire, which worked with the city on the truck, stopped at several fire stations while delivering the truck here from Fairhope, Ala., and showed off the truck.

Bras Across the Bridge Saturday

By Gabrielle Terrett The Vicksburg Post The 9th annual Bras Across the Bridge event will be held at the Old... read more