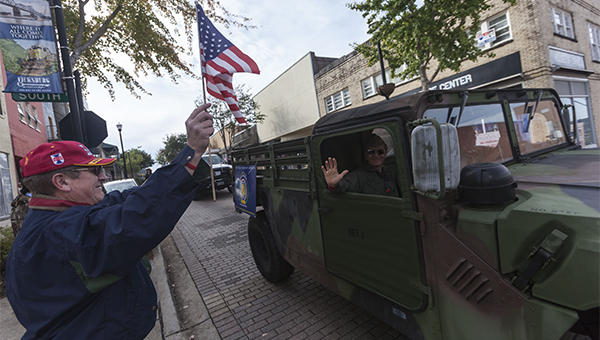 Jimmy Fowler waves an United States Flag as the United States of America Vietnam War Commemoration vehicle passes by on Washington Street during the Veterans Day Parade in downtown Vicksburg on Friday.

Local veterans to be honored

At the 11th hour, on the 11th day of the 11th month in 1918 World War I officially came to an end. Ninety-nine years later that day still holds a special significance in America and is celebrated as Veteran’s Day throughout the country.

Veterans from each branch of the military will be honored in Vicksburg Saturday, Nov. 11, with events including a Veteran’s breakfast, a parade and a ceremony starting promptly at 11 a.m.

“About 35 years ago we had a break and were not recognizing the veterans from a city program,” event organizer Willie Glasper said. “I went to the mayor and aldermen and asked to start this back some 35, 36 years ago and I have been doing it ever since on both Memorial and Veterans Day.”

The day will start with a breakfast open to all Veterans at the Vicksburg Convention Center. Starting at 8 a.m., the breakfast is free to attend, but you must have a ticket, which are available at the local American Legion Posts and the VCC.

The breakfast will be followed by a parade, which will start at 9:30 a.m. and go down Washington Street in downtown Vicksburg.

“The breakfast is open to Veterans and they must have a ticket,” Glasper said. “The tickets are free. Everything else is open to the public. No charge for anything. There’s no application for the parade. Just show up on Belmont Street and we will line you up.”

The line-up for the parade will start at 8:30 a.m. on Belmont Street.

“We’ve had several calls from different organizations that will be in it,” Glasper said. “The Red Cross, the veteran’s administration out of Jackson, we’ve got the car cruisers group with different antique cars, the old army vehicles will all be in there. It is going to be very interesting and the local bands will be in it and the Junior ROTC.”

Following the parade there will be a ceremony at the city rose garden. Col. Michael Derosier, the Vicksburg District commander, will be the speaker and they will also lay wreaths at the monument present in the garden.

Residents of 20 households in Vicksburg can sleep easier now knowing they will be alerted if a fire starts in... read more