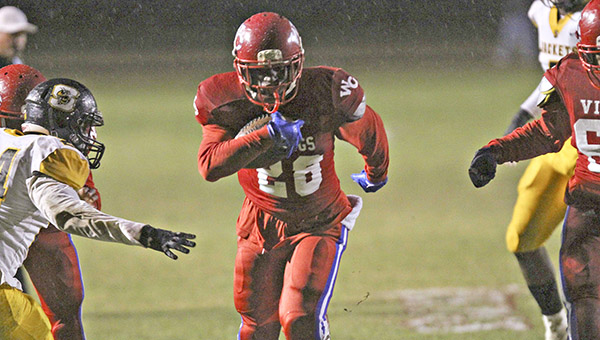 Warren Central's Jerrious Stovall (28) carries the football last week against Starkville. Stovall and the Vikings will go to Jackson on Friday night to play Provine in their regular-season finale. (Courtland Wells/The Vicksburg Post)

The heavy lifting, for now, is done in Warren Central’s quest for a state championship.

It has qualified for the playoffs. It is unlikely to advance its position in the standings. Yet there’s still one more game to play before the postseason begins, Friday night at Hughes Field in Jackson against Provine. So the goal this week for the Vikings is to keep their momentum going, turn a three-game winning streak into four, and head into the playoffs on an upswing.

“We want to continue to be sharp and build on what we’ve got going, and that’s playing really good football,” Warren Central coach Josh Morgan said. “We want to finish our district schedule the right way and build for the playoffs on a positive note.”

In theory, Warren Central (7-3, 4-2 Region 2-6A) can finish as high as second place in Region 2-6A. The Vikings are currently fourth, but a win over Provine (6-4, 2-4) coupled with losses by Starkville and Northwest Rankin would push them higher.

Warren Central needs a specific set of results to move up, which because of tiebreakers all hinge on Northwest Rankin losing to Murrah, so it will most likely wind up as the No. 4 seed in the region and head to Tupelo for the first round of the Class 6A playoffs next week.

Morgan said there is a certain comfort in that, but doesn’t want the Vikings to slack up knowing that there isn’t much they can do to change their position one way or the other.

“It gives us a little bit of peace going in, knowing what our destiny is, but it’s still a week-to-week thing. We’re still fully locked in on Provine,” Morgan said.

Although Warren Central is the favorite Friday night, it actually has a losing streak against Provine. The Rams have won three straight and four of five in the series, with the last meeting coming in 2006.
In 16 games all-time against the Rams, Warren Central also has scored more than 20 points only twice, in 1986 and 1989.

It’s hard to tell if history will hold to those patterns. Provine lost four of its first five region games before routing Murrah 42-7 last week, and allowed at least 40 points in each of its losses against teams in the top half of the standings. Even so, Morgan was preparing for a difficult game.

“Provine is huge, and they want to run the ball. The have two backs that are over 200 pounds and run extremely hard. There’s no doubt what they want to do,” Morgan said. “It looks like another big, physical game.”

Warren Central, meanwhile, is coming into the game on a hot streak. It has won three in a row, including showdowns with Clinton and Starkville the last two weeks that punched its ticket to the playoffs. It has two shutouts during the winning streak and allowed 10 points to Clinton in the other game, leading Morgan to say that he feels his team is hitting its stride at the perfect time.

“We’ve gotten over the hump, and we’ve done it two weeks in a row. So it’s been an important couple of weeks to see the kids take that step in the right direction. Success is something you have to experience, and we’re doing it at the right time of year,” Morgan said. “Since the Northwest Rankin game (a 38-31 loss on Sept. 22) we’ve played some physical, tough football. We stayed the course and it’s paid off for us. We’re playing our best ball right now, for sure.”

Statistically speaking, this was supposed to be a big year for Joe Johnson. The Vicksburg High quarterback was entering his... read more