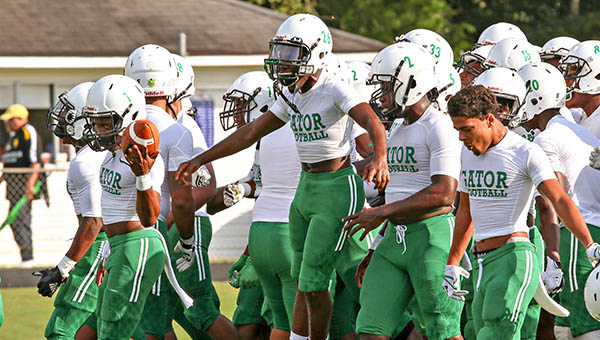 The Vicksburg Gators step onto the field for warmups before the Red Carpet Bowl in August. They’ll host Holmes County Central in their regular-season finale Friday at 7 p.m. at Memorial Stadium. (Walter Fraizer/For The Vicksburg Post)

Gators look to push winning streak to four against Holmes

For the Vicksburg Gators, this week is all about momentum.

Having it. Keeping it. Continuing it.

The Gators (4-6, 4-2 Region 2-5A) face Holmes County Central (2-8, 1-5) in their regular-season finale Friday night at Memorial Stadium. On paper, it’s a game that means absolutely nothing.

Vicksburg is locked in as the No. 3 seed in Region 2-5A and cannot improve or worsen that. Holmes County Central has been eliminated from playoff contention.

For Vicksburg, however, there is a reason to play besides wins, losses and pride. It has won three consecutive games and four of five since an 0-5 start, and closing out the regular season on that kind of roll will be a big confidence-builder heading into its first-round playoff game at Olive Branch next week.

“That’s what it’s about. We’re going to look at executing some things and getting into playoff mode, like protecting the ball and getting stops on defense,” Vicksburg coach Lorenzo Breland said. “I think our focus will be the same. With it being senior night, I don’t see us having to rah-rah the guys. We are getting ready for the postseason, too, so hopefully we can get a lead and rest some starters and give some other people some playing time.”

Although they are riding a winning streak, the Gators have shown some room for improvement. They had 13 penalties for 152 yards in a 29-21 win over Callaway last week, with 10 of those coming in the second half. They had three holding calls and three personal fouls that either crippled their own drives or allowed Callaway to extend them.

“We had a couple of questionable calls, but that was one of the things we focused on in the film study, was to make sure we’re not overextending to avoid blocks in the back or some of the holding calls,” Breland said.

On a more positive note, the Gators also have another streak going. They have scored a defensive touchdown in four straight games. Senior linebacker Nick Anderson has two of those, on interception returns against Ridgeland and Callaway. Both of Anderson’s scores came in the fourth quarter and were pivotal to Vicksburg’s eventual victory.

Vicksburg’s defense has allowed only three touchdowns in its last two games, and is nearly producing as many points as it’s given up.

Fighting off the ‘Christmas Creep’

I love Christmas music. I have a Christmas Pandora station I have carefully cultivated over the last few years. Thumbs... read more