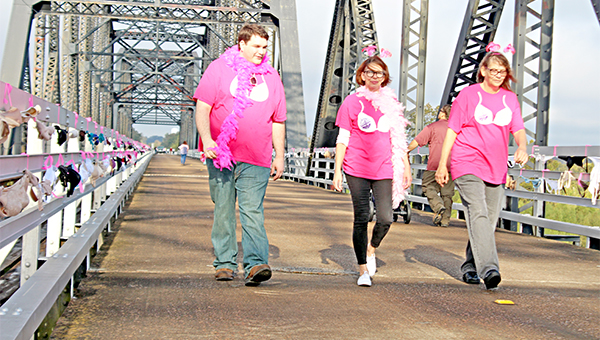 Riverwalk Casino’s Ninth Annual Bras Across the Bridge event was a success Saturday morning at the Old Mississippi River Bridge.

More than 50 people came out to witness the bra-covered bridge and support the cause of the day — breast cancer awareness.

Walkers signed a release form, dressed up in pink boas and hair bows and took on the bridge. After walking across the bridge and back, participants had the opportunity to observe the check presentation from Riverwalk Casino to the American Cancer Society.

“The funds from this event support breast cancer programs,” said Ginny Tzotzolas, general manager of Riverwalk Casino and the creator of Bras Across the Bridge. “We help the American Cancer Society with things such as cosmetics, transportation and treatment for cancer patients.”

Riverwalk Casino collected more than 9,000 bras this year and for each bra collected donated $1 to the American Cancer Society. The donation for this year to the organization added up to $9,794.

“Right now the American Cancer Society has the largest amount of research grants going into breast cancer research, which is approximately $62 million, so some of this money will go to continue that life saving research that we fund. The other remaining money, all of the money that we raise in these strides really, is used for the breast cancer patients,” said Wendy Hutchins a member of the American Cancer Society.

“So, like transportation to and from treatment, if women don’t have a ride. It’s a look-good, feel-better program so that we can help them with the side effects of chemotherapy and other treatments, where it affects their hair and their nails and their skin.

“We help them with how to take care of that. It also goes to a mentoring program we have started where we partner newly-diagnosed breast cancer patients with survivors. They can have someone to talk to about, ‘Is it normal for me to feel this way?’ and what to expect. It’s just that there’s some power in knowing that what you’re feeling is normal and you’re not alone.”

“I’ve actually done this for years and I’ve done breast cancer awareness for 20 years. But on April 19 of 2017, I became that one in eight. I was diagnosed with breast cancer. So this walk is extra special to me this year,” said Sadie Jordan, a breast cancer survivor and walker. “Years ago I had a friend who was diagnosed and succumbed to breast cancer ultimately and I became very passionate about it because I realized at that point and time not many people were aware of breast cancer. What we have learned is that although they have made lots of strides against breast cancer and  a lot has been done, we have a lot more work to do.”

Bras Across the Bridge is an annual event, which allows people to learn more about breast cancer and how it effects everyone and not just the one’s who have encountered the deadly disease.

The event encourages people to get involved and simply donate a bra to hang across the Old Mississippi River Bridge once every year.

“So we thought that made it kind of unique really just the sight of them stretching along the bridge. There’s no place else that you could do it and have that kind of visual impact.”

Many donated bras were decorated with inspiration for the participants in the event.

One bra displayed the words “strike out breast cancer” and was decorated like a baseball. Others were messages from survivors stating, “I am a survivor.”

The initial outcome was more than Riverwalk Casino could have ever expected and even toward the end, people were still donating bras for the cause.

“Our peak year we collected about 18,000 bras but we have moved it and in moving it back, we’ve been in a transitional period,” Tzotzolas said.

‘This year our total donation was 9,700 so we are working on growing it back every year again.”

Family members and friends of breast cancer survivors said the walk was a way to honor affected loved ones.

“Among other things, my mother inspired me to come out today. She was a 30-some odd years survivor of breast cancer,” said Brant Lack a controller at Riverwalk and four-year participant of the Bras Across the Bridge.

“She had cancer back in the middle ’80s and she survived until about two years ago and she died of old age and not cancer. That’s inspiration enough right there.”

The Bras Across the Bridge event most certainly brought awareness to the community about breast cancer and how it affects everyone.

Breast cancer is emerging quickly and the one way to end it is to make everyone aware of breast cancer, who it can affect and how to treat it.

Bras Across the Bridge serves a purpose of bringing awareness to the public about the affects of breast cancer.

“If we can make people aware, like awareness times three, ultimately if I fight and you fight and we all work together and we all fight, we can knock out breast cancer,” said Jordan.

Pet supplies, home decor and even a swing set are but a few of the items available during the Vicksburg-Warren... read more