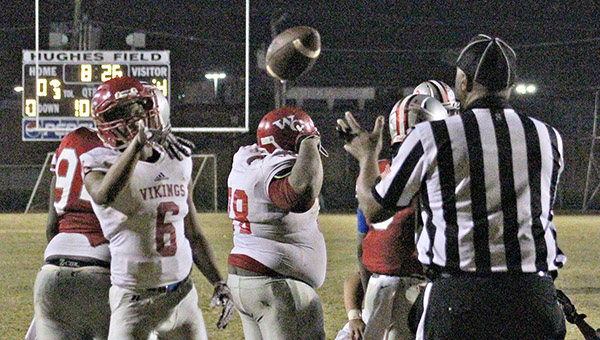 Warren Central running back Corey Wilson, Jr. (6) tosses the ball to the official after scoring a touchdown in the third quarter of Friday’s game against Provine. Wilson ran for 102 yards and two touchdowns on only seven carries as the Vikings won 28-0. (Ernest Bowker/The Vicksburg Post)

JACKSON — There wasn’t a lot of material gain to be had for Warren Central on Friday night, so it just settled for the satisfaction of a job well done.

Corey Wilson, Jr. and Jerrious Stovall each ran for more than 100 yards, Wilson and Anfernee Funches scored two touchdowns apiece, and WC closed out the regular season with a 28-0 victory over Provine.

Warren Central’s playoff assignment — a first-round date with Region 1-5A champion Tupelo — was set when Northwest Rankin beat Murrah on Thursday night. Coach Josh Morgan said he was pleased, however, with the way his team handled Friday’s game with the knowledge that there wasn’t anything to be gained or lost from the outcome.

Warren Central (8-3, 5-2 Region 2-6A) reached the eight-win mark for the fifth consecutive season, something the program has only achieved twice previously in its storied 52-year history.

The Vikings got there with a thoroughly one-sided win in which they never trailed and never allowed Provine (6-5, 2-5) to reach the red zone. The closest the Rams got to scoring was in the first quarter, when Daniel Wilson won a jump ball on a long pass to the WC 22. Quarterback Fred Hunter, Jr. was intercepted by Walt Hopson on fourth down of that possession, and the Rams only had three first downs in the last three quarters.

Provine had 160 yards of total offense — including 28 in the second half — and three-and-outs on seven of its last nine possessions. Provine’s only first down of the second half came on the next-to-last play of the game.

“We made some adjustments the second half. We knew they were going to be a big offensive line with big backs, and we made a little tweak there that helped us and our guys also really played outstanding the second half,” Morgan said.

Meanwhile, the offense continued to churn up yards on the ground. The Vikings ran for 227 yards as a team, with Stovall collecting 108 on 15 carries and Wilson going for 102 yards on only seven carries.
Most of Wilson’s yardage came on two big plays — a 32-yard touchdown on the game’s opening drive, and a winding 53-yarder down to the 1-yard line in second quarter. He also scored on a 1-yard run that put the Vikings ahead 21-0 with 8:24 left in the third quarter.

Funches only had five carries for 17 yards, but vultured two touchdowns from his teammates. He scored on the play after Wilson was tackled at the 1, and then got a 4-yard TD in the fourth quarter after Stovall had carried the ball on eight consecutive plays to move it inside the 5.

Stovall finished with his second consecutive 100-yard game. It was the fourth game in a row where Warren Central has rushed for more than 200 yards as a team.

“I think our offensive line is playing its best ball, by far. They have come together and look very fluid as a unit. They’ve gotten better week in and week out, and (line coach Brian) Anderson has done a really good job with them,” Morgan said. “When you start seeing different backs doing different things like we’ve had in recent weeks, you can look directly at the source of it and that’s the O-line. Our backs have continued to run hard and take care of the football. When it gets to this time of the year it’s about running the football and taking care of it, and it’s good to see that.”

UP NEXT:
Friday, Nov. 10, 7 p.m.
Class 6A playoffs, first round
Warren Central at Tupelo