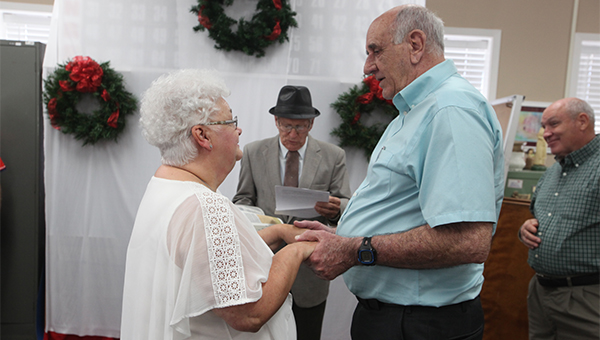 Henry Walker did not expect to be in the situation again, standing next to a woman he loved saying wedding vows, and he was willing to make it known.

“I was adamant and I told everybody, never again,” Henry said. “I said I’m too old. You see how that goes.”

Henry, 76, married Judy Walker, 74, in a ceremony at the Vicksburg Senior Center Sunday afternoon after a three year relationship had grown from friends playing cards into a loving relationship.

“I come (to the senior center) just about every day and he came on Wednesdays and Thursdays to play dominoes,” Judy said. “Then he started to play cards and that is when we really started to get serious. He wanted to get to know me.”

Judy said she never expected to fall in love again, but that quickly changed when she met Henry.

“We just couldn’t stay away from each other,” Judy said. “I didn’t until I met him think I would ever fall in love again. He was caught before he knew it.”

Henry said they have been “talking about this for about six to eight months.

“We’ve been going to eat every once in a while and then we just gradually got talking and finally worked it out.”

“We transformed it from a fun activity center to a serious wedding venue and it was great that they met here, developed a friendship and it just grew and grew,” Harper said. “Now they get to live happily ever after.”

Henry said the senior center just made sense as the venue for their wedding.

“It is where we met, where a lot of our friends are and a good place to have it where people know where it’s at,” he said.

Judy’s brother-in-law Herman Thompson married the couple and the ceremony was followed by a small reception with all those in attendance.

“Even though they are older in life, everybody deserves to be happy,” Harper said. “That is what we promote here at the senior center.”