Boy’s respectful deed gets noticed, earns him a new bike 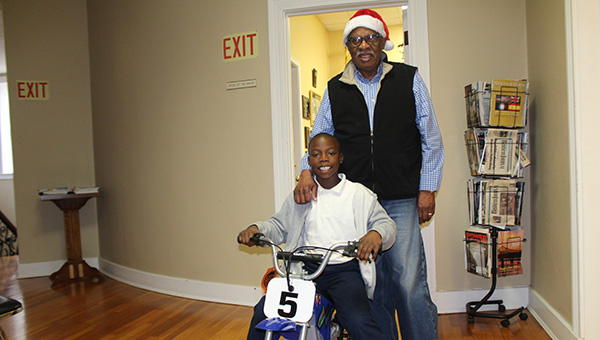 RESPECTFUL GESTURE EARNS HIM A NEW BIKE: Seven-year-old Jamal Washington tries out his bicycle as Mayor George Flaggs Jr. looks on. Flaggs presented the bike to Jamal at City Hall after he stood at attention when a funeral procession for Flaggs’ nephew passed by.

Nov. 25, 7-year-old Jamal Washington was playing in his front yard when a funeral procession passed by.

He stopped what he was doing, stood at attention and put his hand over his heart as the procession went by. The gesture impressed Mayor George Flaggs Jr., one of the members of the procession, which was for his nephew who had been killed in a wreck, and he decided to reward the young man for his actions.

Tuesday afternoon at City Hall, Flaggs gave Jamal a bicycle as a reward for his behavior when the funeral passed by.

“I was impressed by this young man’s actions,” he said. “He stood at attention with his hand over his heart and showed reverence as the procession passed by. We have adults who don’t even pull over when a funeral procession passes by.”

“I feel good,” Jamal said of his reward. When he was asked what he did to get the mayor’s attention, he stood up and put his hand over his heart. His mother, Wynekia Stewart, called Flaggs’ gesture “very nice” adding, “He’s always wanted a bike.”