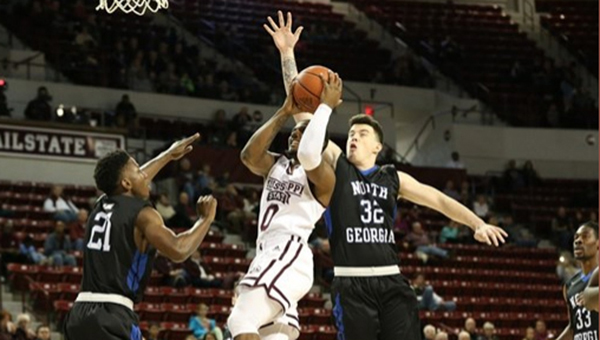 Mississippi State is one of seven unbeaten teams in Division I

There are 351 Division I men’s basketball teams in the NCAA. Only seven of those are still undefeated, and perhaps the unlikeliest of the bunch resides in Starkville, Mississippi.

Mississippi State improved its record to 8-0 with a 95-62 win over North Georgia on Saturday. It’s the team’s best start since winning 13 in a row in the 2003-04 season and has the Bulldogs knocking on the door of the Top 25 as they prepare for their biggest test so far.

Mississippi State will go on the road for the first time this season to play No. 17 Cincinnati (7-2) on Tuesday night.

Mississippi State has not finished with a winning record since the 2011-12 season, when it went 13-2 in the non-conference schedule.

“We feel like we are ready to go on the road,” MSU guard Quinndary Weatherspoon said after Saturday’s win. “As long as our defense travels with us, we will have a chance. We are playing with a lot of confidence right now.”

Mississippi State has had a few tests so far — it needed buzzer-beating shots to get past Jacksonville State and Dayton — but has yet to play a team the quality of Cincinnati.

Stephen F. Austin, at No. 61, has the highest RPI of any of the Bulldogs’ eight opponents.

Cincinnati is also the only quality non-conference game left on MSU’s schedule before the start of Southeastern Conference play on Jan. 2. Mississippi State’s last four non-conference opponents — Tennessee-Martin, Little Rock, Southern Miss and North Florida — are all ranked 220th or lower in the NCAA’s RPI rankings. Only North Florida is above No. 300.

The soft schedule will allow Mississippi State the opportunity to work on some things, coach Ben Howland said.

“We are now through with finals, so it’s all about basketball the next couple of weeks,” Howland said. “We can work on some things and really focus in on becoming the best basketball team we can be.”

Mississippi State is heading into the Cincinnati game off one of its best performances of the season. It shot 56.8 percent in the first half against North Georgia and led 56-23 at halftime. The lead grew to as much as 38 in the second half.

MSU has now shot 50 percent or better in four of its eight games this season. It hit 13 3-pointers against North Georgia, and ranks No. 21 in the country in scoring defense at 61.9 points per game.

“We are in as good shape as we can be going into the Cincinnati game,” Howland said. “It’s basically the first time we will have our full lineup available. You would like to have played these games without players missing time. Overall, we played well defensively today. I am pleased at how well we shot the ball, too.”