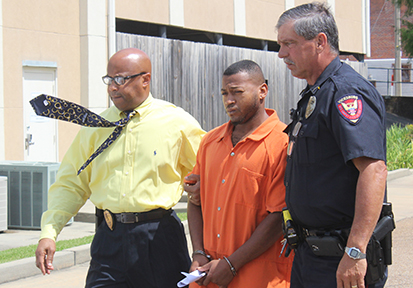 Dexter Smith, 27, is escorted out of the Vicksburg Police Department May 26, 2016, after his initial appearance before Municipal Judge Toni Terrett where his bond was set at $1 million. Smith was sentenced this week in the death of 62-year-old Mary Etta Warren. (File/The Vicksburg Post)

A Vicksburg man accused of killing his 62-year-old girlfriend in May 2016 has been sentenced to 25 years in prison after pleading guilty in Warren County Circuit Court to second-degree murder in her death.

Dexter Smith, 28, was arrested May 24, 2016, in the death of Mary Etta Warren, who died from blunt force trauma to the head that occurred during an argument between the couple at her home on Roseland Drive.

Warren was found dead by fire department paramedics responding to a 12:15 p.m. E911 medical call at her home. The medics immediately notified police.

• Herbert Boyd Smith, 37, was sentenced to 20 years in prison with six to serve and five years’ post released supervision after pleading guilty of aggravated assault — domestic violence and possession of a weapon after felony conviction for holding a woman in her home at gunpoint and striking her in the face with the gun.

He was also ordered to pay $2,584.50 in fines, fees, court costs and restitution to the victim.

• Gregory Bunch, 22, pleaded guilty to receiving stolen property and was placed on five years’ probation. He was ordered to pay $1,384.50 in fees and court costs and ordered to get an associate’s degree before completing his probation.

• Circuit Judge M. James Chaney revoked the drug court order for Michael Glenn Barnett for violating the terms of his drug court agreement. Chaney suspended a 10-year sentence on the condition Barnett complete the Mississippi Department of Corrections short-term drug and alcohol program, complete time at a restitution center to pay $2,710,or half of his court-ordered fines, fees and restitution. Barnett was also placed on five years’ probation.