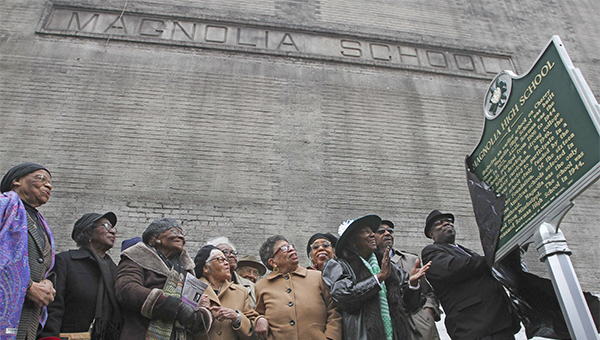 Even as the building that held the school for many years sits vacant on Bowman Avenue, the history of Magnolia Avenue High School will never be forgotten thanks to a new historical marker that was unveiled during a ceremony Thursday.

Open from 1923 until 1958, Magnolia was the second African American high school in Vicksburg. It was later replaced by Rosa A. Temple.

“Magnolia laid the foundation for me to succeed as an educator and as a scientist,” Edgar Smith, who graduated from Magnolia in 1951 and served as the master of ceremonies Thursday, said. “My foundation was built here. We had fantastic teachers. I had an interest in science from a very early age. My chemistry teacher here sparked that interest so I went on and I got my doctorate in chemistry and I taught at major medical schools.”

Thursday’s ceremony started with a program at the city hall annex before the marker was revealed at the site of the school on Bowman Avenue, which is named after J.G.H. Bowman who served as the school’s principal for 38 years. The school was also eventually renamed for Bowman following his death in 1944.

“In the years that I was here were my early elementary years, it was Bowman then. During my mother’s era, it was Magnolia. This is something that we have looked forward to seeing for many years,” northward alderman Michael Mayfield said. “When you look back at the years we spent as young people here in this city and what this school meant back then before integration, it lets you know there is a profound history … It was an honor for me to go here as an elementary student and come back and unveil a marker as an elected official here in the city of Vicksburg.”

“Mrs. (Anthenia) Jefferson and I approached the mayor about a marker,” Bettye Gardner, the co-chair of the marker committee, said. “We felt it was important to make sure Magnolia was not forgotten. People know Temple because it came later and was the next school, but they don’t know very much about Magnolia. It was an outstanding school, a very distinguished high school.”

Many alumni of the school as well as the children of alumni who have died attended the program.

“I have seen people I haven’t seen in many many years and they are looking good,” Smith said. “They were able to bring back memories of the earliest days. The memories were sincere and we all felt the same about how we felt about this institution and what it did for us.”

The marker focuses on Bowman’s contribution to the school and the participation in the Rockefeller study. It is recognized by the Mississippi Department of Archives and History.