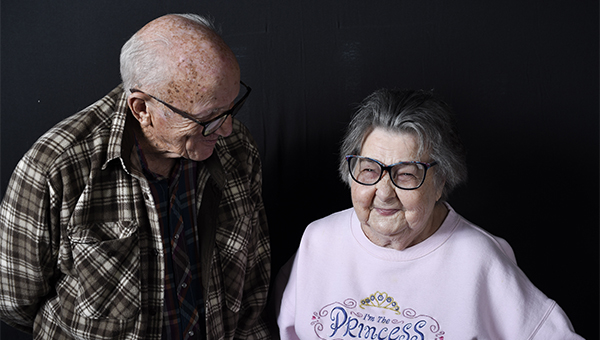 When Bobby Childers found his true love, he decided to make her his bride before he left for the military.

“He proposed in the back seat of the car,” Jaunita Childers said, after finding out the military had mobilized his unit.

That was nearly seven decades ago. On Jan. 3, Bobby and Jaunita Childers celebrated their 67th wedding anniversary.

Bobby and Jaunita met in 1948 after Bobby went to S.H. Kress & Co., which was a five and dime store once located in downtown Vicksburg.

Jaunita said Bobby asked her out about a week later after that first encounter and they went on a double date to the drive in theatre with one of Bobby’s friends.

At the time, the only transportation Bobby had was a motorcycle, Jaunita said, adding, “Mama wouldn’t’ let me ride on the little moped.”

Jaunita said she had already graduated from Culkin High School when the couple met, but Bobby was a senior at Redwood High School.

“We would play on the monuments,” she said, and get on the winding towers.

“There were two winding towers in the park and you could walk up to the top and see the whole park,” she said.

Following graduation, Bobby said he began working at The Vicksburg Post and had only been there for a couple of months when the military mobilized his National Guard unit.

“I was in the 31st Dixie Division and in January they inducted us into the regular Army from the National Guard.”

Before he left with the military on Jan. 21, Bobby proposed.

“We got married at the J.P’s office in Clinton,” Jaunita said, “And I wore a blue suit.”

Jaunita said she continued to work at S.H. Kress and lived with her parents.

“I did get to come home sometimes on long weekends,” Bobby said, “And one weekend I got her and took her back with me.”

After getting out of the service in 1952, Bobby returned to his job at The Vicksburg Post, where he is still employed, and the couple bought their first home together on Grove Street.

“We had a duplex apartment,” Bobby said.

Like most couples, Bobby and Jaunita faced challenges in their marriage, they said, some of which included helping raise their two grandchildren and then their two great-grandchildren, but communication has been key in keeping the marriage together.

“You have to listen to each other and work it out,” Jaunita said. “You may pout a week or two, but still that is no reason to leave. You have to work it out. We have had our arguments, but you have to discuss it.”

“And I mainly give in to her,” Bobby laughed.

Jaunita said she knows she could have let Bobby go when things got tough, but knew there was not any better out there.

“If I had let Bobby go, I could have done worse, and I knew I had a good thing right here.”