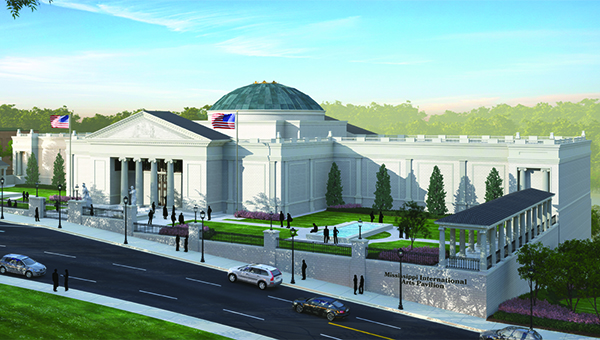 The wonders of Spain, the majesty of Russia and some of the greatest works of art from throughout the world may soon have a home in Vicksburg.

The Mississippi Commission for International Cultural Exchange, which previously organized four international exhibitions in Jackson, is working to bring a permanent museum focusing on international art to downtown Vicksburg.

The Mississippi International Arts Pavilion will feature approximately 20,000 square feet of gallery space and be built on land adjacent to the Vicksburg Convention Center.

The period rooms include reproductions of two rooms from Russia, one from Germany and two from Spain including the Porcelain Room from the Royal Palace of Aranjuez, which Kyle describes as the museum’s Mona Lisa.

“It is the only copy in the world of the greatest room in the world made of porcelain,” Kyle said. “Our copy is valued at $8 million. We have a second room from Spain that is in a more classical style. Spain will never allow anyone else to have copies of these rooms.”

The planned museum will also include a European gallery, an Asian gallery and one featuring Boehm Porcelain of which the museum has already been promised 105 pieces, Kyle said. The final two galleries would be state specific and feature Civil War art and artwork created by Mississippi artists.

“We won’t feature bullets and guns and cannon balls, but we will have portraits, art of famous generals and political figures associated with the Civil War,” Kyle said. “We have begun developing a collection of our own of the greatest artists of Mississippi. That gallery can be interchangeable. In addition to us developing and having our own collection installed, from time to time we will have an exhibition that is focusing on one single artist.”

There are also plans for a grand rotunda that could be used to host receptions for up to 1,000 people and a 300 seat auditorium on the lower level for concerts, films and lectures.

Kyle has been working full time on the project for a year and said the next stage is securing funding. The total cost is expected to be $40 to $50 million.

Mayor George Flaggs said the museum would be, “A game changer in tourism because it would be the first and only international museum in the state of Mississippi.” He added he believes the city will provide financial backing to the project.

“I didn’t want to commit to a dollar amount until we talk it over with the board and we find out exactly where we’re at on it,” Flaggs said. “As far as I’m concerned, it would be the greatest investment the city could ever make in children.”

Kyle said he was attracted to Vicksburg because he has a lifelong affinity for the city and also the combination of an already thriving tourism industry due to the Vicksburg National Military Park and the riverboats as well the interstate passing through town.

“The trend seems to be that they come to the park, visit the park, maybe have one meal here and then they get back on the interstate and leave,” Kyle said. “When I presented this project to the Mayor, the Mayor said ‘this is the second major resource we need to further enhance our tourism growth.’ This project being a world-class art focus merits people spending the other half of a day here in Vicksburg, which greatly lends the opportunity for them to stay overnight.”

The four international exhibits Kyle helped organize in Jackson attracted more than 1.3 million visitors to the city and provided an estimated $200 million in economic impact for the state.

“Initially I had called this the Vicksburg International Arts Pavilion, but in a meeting with Senator (Briggs) Hopson we were discussing a lot of things and one of the questions was the Grammy museum is called the Mississippi Grammy Museum,” Kyle said. “This new Mississippi Arts and Entertainment Center in Meridian is called Mississippi. We determined that the perception that this is a real statewide project would be very beneficial to us if we changed it from the Vicksburg to the Mississippi International Arts Pavilion.”

The next step in the process of making the museum a reality is meeting with the state legislature to see what type of funding will be provided by the state. Hopson and Flaggs are expected to meet with Lt. Gov. Tate Reeves and Speaker of the House Philip Gunn in February.

“I think it will be a great tourist destination,” Hopson said. “One, it will have all the art exhibits he’s already done in Mississippi and have them hosted here permanently. Two, he will have special exhibits that can come here. We draw so many tourists through the park and the riverboats. This would just be another feather in the cap of Vicksburg.”

Hopson said it would likely have to been a bond project at the state level.

“It is not an appropriations project,” Hopson said. “You’ve got to see what the bond situation looks like and that means looking at how much debt is being paid off one year and how much debt you’re willing to incur for projects that could promote economic development and tourism.”

Flaggs has also committed to use his contacts to raise money from the private sector.

Kyle said they hope to break ground as soon as they have a commitment from the city and the state with the goal of opening the museum in the early part of 2020.

“My mantra has been it is Vicksburg’s turn,” Kyle said.