Brothers among 4 charged in separate burglaries 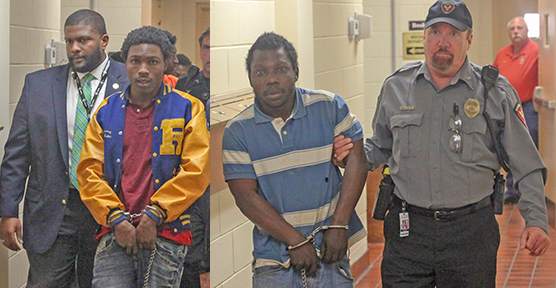 Two brothers are charged with burglary in the March 12 break-in of Adolph Rose Antiques, 717 Clay St.

Vicksburg police Sgt. Johnnie Edwards said Thomas Gray, 27, and Antonio Gray, 21, both of 1435 Virginia Lloyd Drive, Raymond, were arrested by officers at the store. Antonio Gray is also charged in a Dec. 22 burglary of the store.

According to police reports, Thomas Gray was seen on store video kicking in the door to the business, setting off a sensor alarm, hesitated, then entered the store, with Antonio acting as lookout. Police caught Thomas in the store with a bag of merchandise.

• Two window air conditioning units, two tires and a wireless camera were reported taken about 3:12 p.m. Sunday from a home in the 500 block of Glass Road.

• Police recovered a 2008 Ford Focus about 11:10 a.m. Friday at Halpins Alley. The car was report stolen from Vicksburg.

• A 56-inch Galaxy TV, a brown and gold Diesel watch and a Posamo Blue watch were reported taken about 11:16 a.m. Friday from a Ford Super Duty pickup parked at the Ramada Inn, 20 Orme Drive.

• Dewanda Lachay Butler, 1200 Mission 66 Apt. 103, was arrested about 10:13 a.m. Friday at the intersection of Washington and Veto streets on a warrant from Warren County Circuit Court. She was also charged with contempt of court and served with an unrelated warrant.

Vicksburg police made the following misdemeanor arrests between Friday and Sunday:

• Jasmine DeJaneria Rena Watson, 21, 2640 Roosevelt Ave., was arrested about 5:39 p.m. at the Vicksburg Police Department on five counts of contempt of court.

• Jonathan Wesley Lynn, 20, 2217 Glass Road, was arrested about 1:54 a.m. Sunday in the 1300 block of Washington Street on charges of public drunkenness and disorderly conduct.

• Zachary Lee Boyd, 23, 885 Kirkland Drive, was arrested about 1:54 a.m. Sunday in the 1300 block of Washington Street on charges of public drunkenness and disorderly conduct.

• Frederick Jermaine Knight, 38, 611 Santa Rosa Drive, was arrested about 11:08 p.m. Friday on North Washington Street on charges of driving with suspended license, speeding, having no insurance and contempt of court.

• April Michelle Daily, 35, 545 Fonsylvania Road, was arrested about 8:58 a.m. Friday in 500 block of Fonsylvania on a charge of contempt of court.

• Shaquille O’Neal Mabry, 24, 1526 Shady Lawn Road, Pickens, was arrested about 12:57 a.m. in the 100 block of Indiana Avenue on charges of expired driver’s license, speeding, no proof of insurance and having an expired tag.