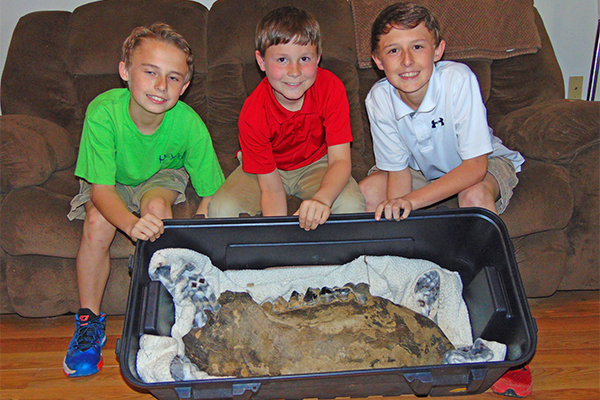 Shawn Sellers, left, Michael Mahalitc and Caid Sellers, display the lower left jawbone of a mastodon they found in a plowed up area of their family’s property in Bovina. (John Surratt/The Vicksburg Post)

When most students go on spring break, they go to the beach or take a vacation with the family.

Shawn and Caid Sellers and their cousin Michael Mahalitc became dinosaur hunters — in a sense. While walking through a plowed area on their family’s property in Bovina, the boys uncovered a relic from earth’s ancient history; the lower left jawbone of a mastodon.

“I just saw it in the dirt,” Caid said. “I thought it was a log, then I turned it over and saw the teeth. It was heavy. I tried to lift it. We all (he, Shawn and Michael) tried to lift it.”

“The boys came in and said they found a dinosaur bone,” said Lynett Welch, Shawn and Caid’s mother. “I called the (Mississippi) Museum of Natural Science and told them what the boys found. My husband took it over to the museum the next day and they confirmed it was a mastodon bone.

“The man we talked to told us how to preserve it.”

Mastodons roamed the earth about 2.6 million to 11,700 years ago, and their remains have been found all over the world.

Welch said the family has been finding petrified wood and other items on their property for years. But finding the mastodon bone was a bit of surprise.

“We’re talking about a very mature individual,” George Phillips, paleontology curator at the museum, said of the boys’ find.

He said the estimated age of the jaw’s owner was determined by the number of teeth in the jaw.

Mastodons, he said had 24 teeth over their lifetime, “But there’s no more than two or three teeth in use at any time.”

The teeth form and erupt, or grow, in the back of the mouth and move forward in the mouth until they are shed at the tip of the jaw. “They actually cleave off over time; the tooth is gradually eroding and breaking apart and shed out the front.”

Phillips said the jaw was the third mastodon find he’s examined in the past month, adding he has seen a photo of a molar and tusk, both found in the Mississippi River, and the boys’ find. Finding half of a lower jaw, he said, “Is very extraordinary.”

Caid said he plans to preserve the jawbone and keep it, and his mother said she doesn’t doubt more finds could be coming.

“There’ll never be another spring break like this one,” Caid added.