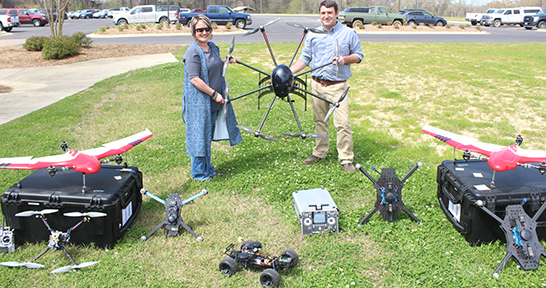 Jenny Laird and Shea Hammond show of the U.S. Armu Engineer Research and Devlopment Center’s Enviromental Lab’s assortment of Unmanned Aircraft Systems that researchers use for both environmental and military purposes.

From detecting algae blooms to helping keep soldiers safe on the battlefield, the Unmanned Aircraft Systems team in the environmental lab at the U.S. Army Engineer Research and Development Center is on the cutting edge of developing uses for drones.

The team has a fleet of drones that will soon include a six-foot long helicopter all the way to small drones they have built in-house. The drones all have different abilities, but the real value is in the sensors that can be attached to them.

“Just because we have a bird that can fly, we have to develop the sensing system and the analysis portion. That is a lot of work,” Shea Hammond, a wildlife biologist and UAS developer, said. “We think about drones and they are sexy things and they are bright and shiny and people really like them. What you have to understand is they are only a vehicle. They are only designed to carry something of sensing value to us.”

Hammond, a Vicksburg native, is a former Marine who got his start in the type of geospatial work the team uses drones for by mapping turtles and bats as a biologist with the U.S. Fish and Wildlife Service.

When drones came on the scene, he said it was easy to see how they could be useful doing that type of mapping and sensing work. After moving back to Mississippi, he enrolled in a program at Hinds Community College where he learned to build and operate drones.

“Although I had a master’s degree, I decided to go to the Hinds program,” Hammond said. “They have a UAS program there. That is where I really started learning how to build and work with drones. I did that for some time and then I was picked up by ERDC. When I came to ERDC that is when I started learning about sensing systems.”

He now helps to pilot and program the drones and is also helping the team to design and build their own drones that will be able to interface with each other and ground robots with a swarm mentality.

The environmental labs uses the drones to map wetlands and detect invasive species, but the programs and sensors they are working with have far reaching abilities and they are looking to expand the usefulness to the military and other parts of the government.

“Autonomous systems in general are becoming ubiquitous across the board,” Hammond said. “They are the future. Being able to swarm with drones and also interact with ground robots enables us to have say convoys that are unmanned, that are autonomous. It needs to be able to make decisions and the drones can act as the eyes and ears for those types of convoys without putting any people in danger.”

The team is also looking for ways to use the mapping and sensing abilities to help FEMA in disaster relief and to assist the Corps of Engineer’s blue roof project.

“It is all dependent on the sensor and what you’re trying to detect,” Jenny Laird, the ERDC UAS Coordinator, said. “From that, the analysis that the scientist does can be changed around and used in different aspects and ways depending on the project. Whatever the main question is we are looking to answer, we can modify the sensors, we can modify the platforms and modify the project itself.”

Mississippi forecast to rise back above flood stage