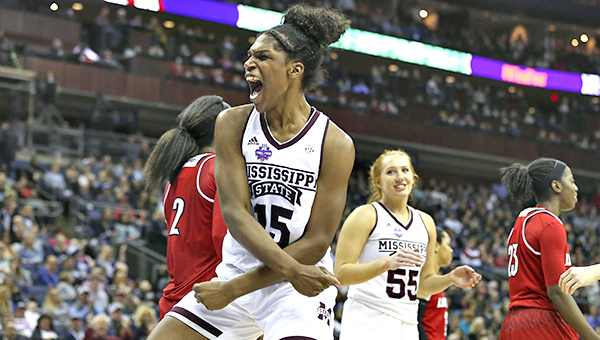 COLUMBUS, Ohio (AP) — Once Roshunda Johnson hit the tying 3-pointer with seven seconds left in regulation and Teaira McCowan forced a miss on the other end, Mississippi State knew it was in good shape.

Especially in the Final Four.

McCowan had 21 points and a Final Four-record 25 rebounds, Vivians scored 25 points, and Mississippi State reached the national championship game for the second straight year with a 73-63 overtime win over Louisville on Friday night.

After Johnson’s jumper, Louisville’s Myisha Hines-Allen drove the length of the floor but missed a layup with McCowan defending her.

In overtime, the Bulldogs asserted themselves and Morgan William, who hit the game-winning shot in OT last year in the Final Four to end Connecticut’s 111-game winning streak, made two free throws in the last minute to help Mississippi State (37-1) pull away.

The Bulldogs won’t have a rematch with UConn. The Huskies lost 91-89 in overtime to Notre Dame later Friday night in another epic.

Louisville (36-3) managed just one basket on 10 shots in the extra period.

McCowan broke the rebounding mark set by Charlotte Smith of North Carolina in 1994 when Mississippi State’s 6-foot-7 center grabbed her 24th board.

McCowan also set the overall NCAA Tournament record for rebounds with 92, breaking the mark of 75 set by Minnesota’s Janel McCarville in 2004.

“She’s done that all year against the best competition,” Mississippi State coach Vic Schaefer said. “She did it again tonight on the biggest stage.”

“It’s a shame it has to come down to that,” Louisville coach Jeff Walz said. “It was a five-point swing. So it impacted the game.”

Louisville came back to take a 59-56 advantage on Hines-Allen’s layup with 11 seconds left, setting up the exciting finish in regulation.

Asia Durr scored 18 points for Louisville (36-3), which was making its third appearance in the Final Four. Jazmine Jones added 15 in a game in which had 15 lead changes.

Arike Ogunbowale’s jumper from the corner with 1 second left lifted Notre Dame to a 91-89 overtime victory over Connecticut on Friday night in the women’s NCAA Tournament national semifinals.

Ogunbowale finished with 27 points and Jackie Young had a career-high 32 to lead the Irish back to the championship game for the first time since 2015.

Ogunbowale had a chance to seal the game in the final minute of overtime, but she missed two free throws. Crystal Dangerfield then hit a 3-pointer to tie it at 89, setting up the fantastic finish. The Huskies threw the ball down the court after the 3, but didn’t get a chance to tie it.

It’s the second consecutive year an undefeated UConn team lost in the Final Four on a last-second shot in overtime. Last time it was Mississippi State and Morgan William, ending the Huskies’ 111-game win streak.

The Irish will face Mississippi State on Sunday night in the title game. Muffet McGraw’s squad will be looking for its second national championship to go with the one the Irish won in 2001.
This was the first time in the 36-year history of the Women’s NCAA Tournament that both national semifinals went to overtime.