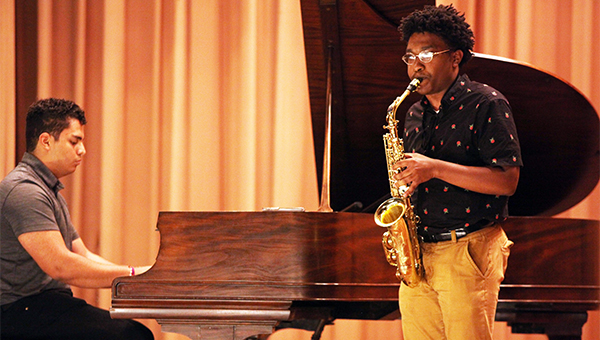 Saxophonist Raymond Young and pianist Santiago perform a jazz melody together at the Raise the Roof talent show at the Southern Cultural Heritage Center Saturday.

Contestants help to raise the roof

Vicksburg’s stars were out on Saturday night at the Raise the Roof talent show, where 13 contestants competed for cash prizes and to benefit the Southern Cultural Heritage Center’s new roof campaign.

Singers, dancers, instrumentalists, a poet and a stand up comedian took the stage to take turns showing off their special skills.

Cameron Mathis took home first place with her rendition of the song “Remedy,” Gabby Andrews was the first runner up for her dance routine to the song “Boom Boom,” Noel Tello was the second runner up and performed a rendition “If You Could Only See Me,” and third runner up was Ryne McCallum for his stand up comedy set.

“It’s amazing, I was not expecting it at all because there are so many talented people here,” Mathis said after receiving her first place trophy. “I’m shocked. I did not think I was going to win. There were so many people that were so good.”

Mathis said the whole competition was set up great and that she definitely planned on coming back next year.

“I did it one year and then I took a break last year, and just decided to give it a shot,” Mathis said. “I didn’t think I was going to win or anything, I was just going to try for the experience, and it’s a really amazing event. I love it.”

Andrews said she was surprised when she received the first runner up trophy. She had been working on her routine for four months before the show.

“I was just happy,” Andrews said. “I love tap dancing, it’s been my favorite for a couple of years.”

Tello, who played guitar and sang, said it felt good to place in the show, and hoped more people would see how much musical talent the city has.

“I haven’t done a talent show like that in years. This was really cool, a lot of talented people,” Tello said. “Vicksburg has always been a big hotbed of musicians, and people just don’t realize it. We have talent galore around here. So it’s cool, it feels good to be amongst those.”

Meanwhile, McCallum said he originally didn’t expect to place because he was doing comedy. He did a variety of celebrity impersonations, ranging from Robert De Niro, to Chris Rock to President Donald Trump, which he’s had years to practice.

“Some of the voices, like Arnold Schwarzenegger, I’ve been doing it since I was around 8,” McCallum said. “I started playing around with all the people in my class, it’s just something fun to do.”

Not many people can say they know what it’s like to turn 106, but Ellen Virginia Sorrels Seawright will soon... read more