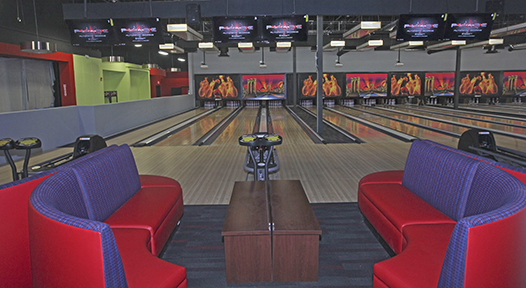 Fun Lanes bowling alley is seen in the Vicksburg Mall in March. The new bowling alley is now open for business, according to operations manager Patrick Belden. The facility is open until midnight during the week and 2 a.m. on weekends. (Courtland Wells | The Vicksburg Post)

“We’re going to have a soft opening now; we’ll have a grand opening at a later date,” said Patrick Belden, operations manager for Fun Lanes, adding the alley opened at 3 p.m. Tuesday.

Belden said the bowling alley, which is located in the former Goody’s clothing store in the mall, will have electronic scoring, specialty lighting and video games. There will also be a restaurant serving pizza, hamburgers — “a full menu plus alcohol,” but for the time being a reduced menu will be available.

The bowling alley has not received its liquor permit, he said.

The city has been without a bowling alley since Red Carpet Lanes, which operated on Clay Street near Hope Street for 48 years, closed in 2007 because of structural problems with the building and a lack of bowlers.

A Vicksburg woman is starting a program geared towards those who want to break free from the prison walls of... read more