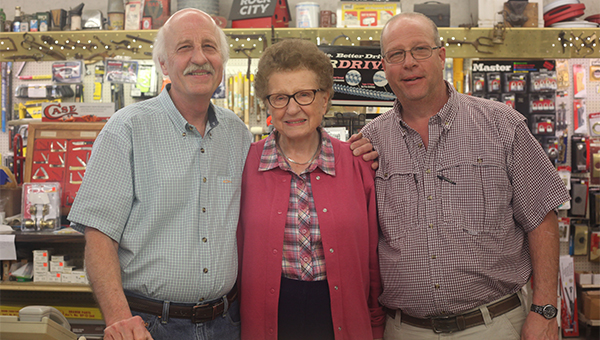 Haden Hardware has been in the Vicksburg community for 60 years

The business has evolved through the years, but one thing has remained the same, its friendly service.

“We’ve got customers that just come in and talk for a while,” Haden said.

“And if somebody needs help, the boys will go out of their way to help them,” Haden said, of her sons, who still work at the store.

In 1958, the Hadens opened their first store, Haden Supply Co. on Openwood Street where they sold plumbing material.

From Openwood, the couple moved the business to Clay Street.

With a larger facility, Haden said they were able to branch out, and the expansion allowed them to sell more than just plumbing materials.

At one point, they even housed a Montgomery Ward store inside the building, she said.

“We sold their merchandise, but we didn’t keep that too long because they started sending us ladies underwear and clothes and refrigerators and tires, and we did not want all that stuff. So J.B. finally told them to come and get it,” Haden said.

“It was just not working out, because they were telling us what to do and we were just not used to being told what to do,” she added.

Sixty years is a big milestone, Ken Haden said, of the business’ anniversary.

Ken Haden along with his two brothers all began working at the hardware store at a young age.

“At first it was tough because you worked for your parents, but I am proud now to say that I was raised like this with my parents and brothers,” Ken Haden said.

There was a time however, when all three sons left to see what life was like outside the family business, but they ultimately all came back “home.”

Ken Haden recalled a story about his younger brother Eddie, now deceased, when he left the store.

“He got mad at Mom and Dad and he went and applied at Mississippi Hardware,” Ken Haden said, adding he stayed there two weeks before eventually returning to the family business.

“Dad told the owner that he would get over it, he just needed to get out of here for a little while,” Ken Haden said.

Mike Haden, who was four-years-old when his parents opened the first store, said it has been rewarding to have grown up in the family business.

“We have always done everything together. Of course when we were all teenagers, we left for a little while, but we all migrated back to the store, which turned out good,” Mike Haden said.

In addition to J.B. Haden, Gertrude and the couple’s sons, the family business has also included grandchildren occasionally working at the hardware store and now great-grand children come in to visit.

“This is us,” Ken Haden said, “And I wouldn’t trade anything in the world for working here.”