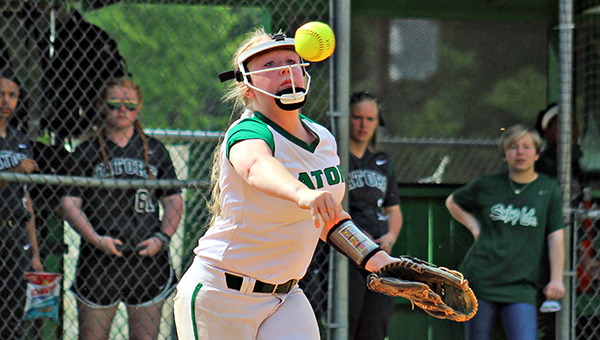 Game 1 of the playoffs was a competitive loss for the Vicksburg Missy Gators.

Game 2 was an epic disaster.

Lake Cormorant batted around in both the third and fourth innings, and took advantage of a slew of Vicksburg errors — both physical and mental — to score 15 runs en route to a 16-2 rout on Saturday and a two-game sweep of the MHSAA Class 5A softball playoff series.

Lake Cormorant (11-10-1) advanced to face Division 2-5A champion Grenada in the second round.

“We just stopped making plays. We stopped making routine stuff and it killed us,” Vicksburg coach Brian Ellis said. “We’ve been Jekyll and Hyde throughout the year. We’ve played some good teams pretty well for a few innings, and we just let the mental side get to us a little bit too much and the concentration went down.”

Vicksburg (13-7) was plagued all series long by a lack of offensive production. It only had eight hits total in the two games and didn’t score a run until Abby Hasty drove in a pair with two outs in the bottom of the fourth inning in Game 2. Two batters later, Jamie Ward popped out to end the game and the series by the mercy rule.

“We thought we had to get out too quick to catch up to their pitchers. Which we’ve faced a lot faster pitchers this season. We just got everything out on our front side and we weren’t staying back,” Ellis said of his team’s hitting woes during the series. “We’ve got to learn to use all parts of the field. When we figure that out it’ll just be reaction and we’ll always be able to stay back and do whatever we have to do.”

Poor hitting was hardly the only reason for the lopsided score in Game 2. Vicksburg committed six errors in the last two innings, and had several other plays where mental errors such as throwing to the wrong base or missing a cutoff man allowed Lake Cormorant to advance or score runners.

Lake Cormorant also hit the ball well. It had 12 hits in the third and fourth innings combined, with four of those going for extra bases.

It’s the second time in three seasons that Lake Cormorant has eliminated Vicksburg from the playoffs, and the second year in a row the Missy Gators have bowed out in the first round. Ellis, however, remained optimistic about the future of a team that has a host of players returning next season.

“There’s things that we’ve got to do better. We’ve got five juniors coming back next year and we just had the one sophomore and four or five freshmen. And out of those freshmen, I’ve got three that played all year basically,” Ellis said. “So at the varsity level we’ve got the experience, just like we should have had it with our juniors this year. What we’ve got to do is make sure we take that experience, good and bad, and learn from it.”

To the editor: I am disappointed with the first bullet point under Our Mission. You should just omit it from... read more