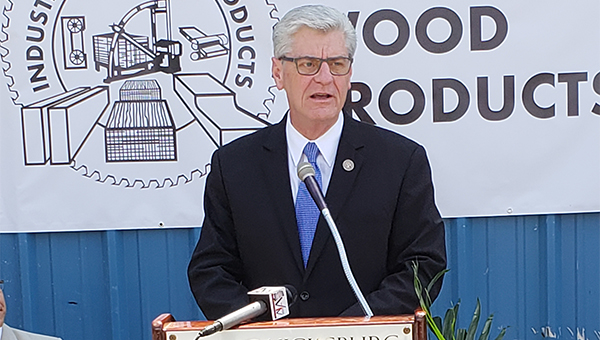 A North Carolina lumber company is investing $2 million in Warren County to build a manufacturing plant that will create 50 jobs.

Bryant said the plant will be the company’s only manufacturing facility outside of North Carolina.

“They could have gone anywhere,” Bryant said. “They’re here in Mississippi; not only that, but they’re in Warren County and Vicksburg, Mississippi, and we thank them for that. I know we have a lot of big projects, but to have 50 jobs, that means so much to us. These are 50 opportunities for people to come and live the American dream.

“We want to make sure they have the best workers in Mississippi.”

“You’re putting a great investment into this,” Richard George, Board of Supervisors president, told company president and CEO Ryan Hilsinger and plant manager Kiel Niederriter. “We wish you the very best and will help you every way we can.”

Mayor George Flaggs Jr. said the plant’s announcement “is a new beginning of economic development and prosperity. Vicksburg’s time has finally come. This is the first game changer; you ain’t seen nothing yet.”

Hilsinger said after the announcement ceremony plans are to have the plant in operation by Aug. 1.

He said the area’s people and its welcoming environment were what convinced the company to locate its plant here.

“The group that you guys have on the public and private side is creating business in this area,” he said. “By far, this is best group we’ve dealt with. They facilitated us, they guided us, they helped us get this across the line, and at the end of the day it has everything to do with the folks here within this community to make this a possibility.”

He said the company buys wood from lumber mills to make other products. He said the plant will have two divisions, an industrial division to make pallet and crates and boxes, and a division making a high grade board that is sold at retail in stores like Lowe’s.

“We will ship basically (to) the western half of the country from this facility,” he said.

Bryant credited the work of city and county officials and the Partnership, the county’s economic development agency, for bringing the plant to Vicksburg.

“The city and the county are working better than they have before,” he said.