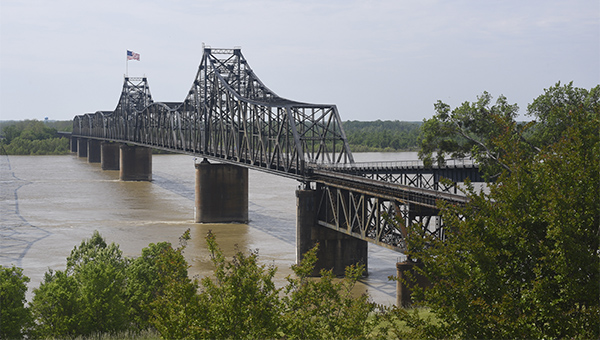 NOT OPEN YET: The group “Friends of the Vickburg Bridge” was originally on the Warren County Board of Supervisors Monday agenda for a resolution asking the supervisors to have the Warren County Bridge Commission open the 88-year old structure to year-round bicyclist and pedestrian traffic. They were removed from the agenda because the supervisors need more time to make an “informed decision,” according to Board President Richard George. (Courtland Wells/The Vicksburg Post)

Since showing up en masse at the Warren County Board of Supervisors work session April 23, members of a group hoping to get support from the board in opening the old Vicksburg bridge to pedestrian and bicycle traffic year-round have been spreading the word to attend Monday’s official supervisors meeting.

That isn’t necessary any longer.

Linda Fondren, the main spokesperson and a key organizer of the group “Friends of the Vicksburg Bridge,” was initially on the agenda for Monday’s 9 a.m. meeting to “approve a resolution to open the Old Vicksburg Bridge” but a revised agenda that was emailed to media and county officials a half-hour later Friday didn’t include Fondren.

Annette Kirklin, another prominent member of the group, said they were told by County Administrator John Smith the supervisors “needed more time.”

“The Friends of the Vicksburg Bridge are disappointed that the resolution was removed from Monday’s agenda,” Kirklin said. “We hope that the supervisors will have it on their next agenda. The residents of Warren County have been waiting a long time for the bridge to open and they are more excited than ever about the possibilities.”

Board President Richard George said he wasn’t sure how the item got placed on the agenda, but more time is needed for a decision to be made, because attorneys for the supervisors and the bridge commission have not had time to “confer and compare notes and have questions asked and answered in order to prepare the request from the Friends of the Bridge.

“We must make an informed decision, and that’s going to take a little bit of time, because both parties have other business matters going on as well,” George said.

The group is seeking a resolution from the supervisors to have the Warren County Bridge Commission open the historic bridge to pedestrian and cyclist traffic throughout the year, rather than just for special functions.

The 1.6-mile, 88-year-old span is owned by Warren County and managed by the five-member Vicksburg Bridge Commission. It was closed to vehicles in 1998 over safety concerns presented mainly by the Louisiana Department of Transportation and Development. Louisiana maintains the Interstate 20 bridge and stopped allocating money to the bridge on the west side of the state line after it was closed to vehicles.

Kansas City Southern Railroad leases the track on the bridge from the county.

The bridge’s driving surface, or deck, is a popular site for special events like the Over The River Run, which began in 1989, 5K walks, the Bricks and Spokes ride to promote downtown, a breast cancer benefit featuring bras strung along the old road’s railing. Wheelchair bikers and bicyclists have also crossed the old bridge for a “Walk, Roll and Stroll” benefit for Living Independence for Everyone, a Jackson-based charity for the disabled.

The supervisors are scheduled to meet Monday on other matters on the third floor of the Warren County courthouse.

Come rain or shine the show must go on, so even with a 60 percent chance of rain and possible... read more