Mississippi identified as most food insecure state in U.S. 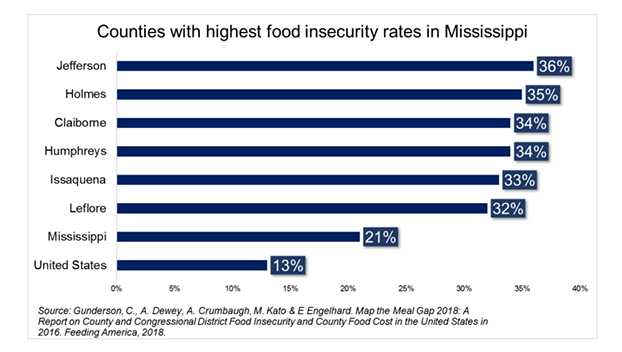 JACKSON — For the eighth straight year, Mississippi has been identified as the most food insecure state in the country, according to a report released this week by Feeding America, a nationwide network of food banks that delivers more than four billion meals annually to people who consistently suffer from hunger.

More than 600,000 Mississippians, or approximately 20 percent of the state’s residents, had limited or uncertain access to healthy meals in 2016, the last year for which data was available. This is the eighth edition of Feeding America’s annual report, titled Map the Meal Gap, and each year Mississippi had the highest rate of food insecurity, hovering around 20 percent. From 2012-16, it was the only state to reach that mark.

The study uses answers to Census questions on food security, as well as economic indicators such as unemployment, median income, poverty and home ownership rates, to determine food insecurity rates. The U.S. Department of Agriculture defines food security as having ample resources and access to healthy food options throughout the year.

Jefferson County, with 36 percent, had the highest rate of food insecurity in the country. Several other Mississippi counties also had high rates, including Holmes (35 percent), Claiborne (34 percent), Humphreys (34 percent) and Issaquena (33 percent).

“The Delta’s a main area, because it’s rural. You have a lot of people who live a lot of miles from the nearest grocery store,” said Charles Beady, chief executive officer of the Mississippi Food Network, a local partner of Feeding America that serves 430 agencies around the state.

“But that’s also true in our state capital here in Jackson. The majority of Jackson is a food desert,” Beady said. “Some 20 percent of people are under or at the poverty line, and a third of the people live a mile or more from a grocery store. So there are food deserts all over the state.”

Twenty-five percent of Hinds County is food insecure, while the national rate is 13 percent.

While nationally, as well as in Mississippi, food security has improved over the past few years, hunger is still a pressing issue, said Feeding America president Matt Knott.

“Feeding America is particularly concerned about the ongoing challenges facing rural and southern communities since the Great Recession,” Knott said. “While we are relieved that food insecurity rates have slightly declined in recent years, the total number of people facing hunger is still higher than it was before 2008.”

Even though the federal Supplemental Nutrition Assistance Program (SNAP) and other similar programs help alleviate food insecurity in many communities, 30 percent of people struggling with hunger in Mississippi earn too much money to qualify for SNAP benefits. In Mississippi, the cutoff salary for qualifying for SNAP is $15,782, or 130 percent of the federal poverty guideline.

And on April 12, some members of Congress introduced legislation, known as the Farm Bill, that would increase work requirements for people eligible for SNAP, National Public Radio reported. The bill’s supporters argue that mandatory job training will lead to increased employment and help reduce poverty.

“While the Feeding America nationwide network of food banks delivers more than four billion meals annually to people facing hunger, SNAP serves 12 meals for every one meal we provide,” Knott said. “As Congress debates the 2018 Farm Bill, SNAP must be protected and strengthened so that people facing hunger and working to re-establish independent lives have the essential food resources they need.”

We find a lot of people (in that gap) in the work that we do, just making too much money to qualify (for food assistance programs) and not enough money to feed your family,” Beady said. “If you’re talking about upping the (work) requirement, that means you’re probably going to put more people in the category of hungry and food insecure, which means our job will be even greater than it is now.”

In addition to food insecurity rates, the report maps the average meal price and percent of hungry people in the income gap of every county in the country.