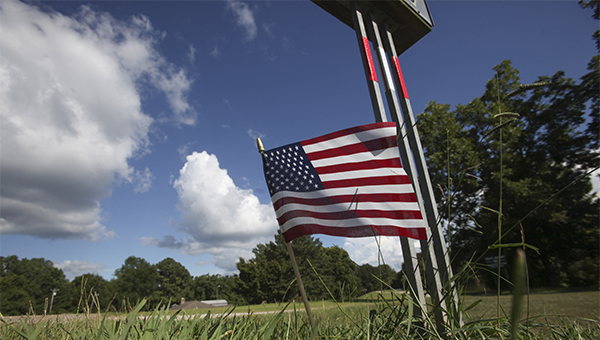 A flag placed at a mailbox is seen flying in the wind in front of a mailbox on Lake Side Drive Tuesday. (Courtland Wells/The Vicksburg Post)

The Lake Park Estates neighborhood is officially ready for the Fourth of July holiday.

Sunday, members of the community went around and placed American flags at each of the 74 mailboxes in the neighborhood to celebrate the holiday.

Meg Falls, who is the head of the Lake Park neighborhood watch, said the tradition has dated back at least four years and she began helping last year.

“We put flags at the mailboxes every year Memorial Day weekend and Fourth of July,” Falls said. “We put them out be patriotic and nice. We just want them to know we are patriotic and it is something nice to lift people’s spirits during the holiday.”

Falls said a team of three people spent about an hour Sunday putting the flags out at the mailboxes where they will stay for about a week.

“Last year, we had a bunch of people who asked who did it, but we didn’t say,” Falls said. “They were really surprised and happy and said to keep it up.”

Falls said a woman in the neighborhood bought all the flags along with a few extra so if one gets taken or something happens to it they are able to replace it.

“She said she doesn’t want recognition,” Falls said of the woman who originally purchased the flags. “She just wanted Warren County to know that Lake Park is patriotic.”

The hills and hollows of the Vicksburg National Military Park echoed with the sounds of artillery Monday, as gun crews... read more