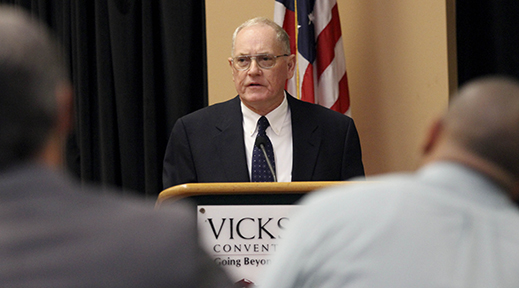 Your taxes are going to increase over the next few years, was the message Warren County Board of Supervisors President Richard George delivered to those gathered Wednesday for the monthly Vicksburg Warren Chamber of Commerce luncheon at the Vicksburg Convention Center.

The county supervisors have been in the midst for the last several weeks of creating the 2019 fiscal year budget that will take effect Oct. 1 and a millage increase will be necessary.

The Vicksburg Warren School District has issued $35 million dollars in bonds from the $83 million bond referendum that voters passed in March and George said he “anticipates in the next year or two, the school district will issue the remaining $48 million in bonds.”

“And we’re looking at another tax increase of 5 mils in a year or two,” George said. “It’s a burden we must bear. We have no choice but to raise taxes.”

“It’s a terribly expensive project, but will be long-lasting and a must if we are to see economic growth and prosperity in our community,” George said. “Unfortunately, prosperity is not cheap and it’s not pleasant to tell you of a financial burden. But education rules the roost and should.

“We must educate our youngsters of a better way of life or be prepared to bear the burden of incarceration.”

George said the board of supervisors will be closing on the sale of 147 acres for a proposed new 350-bed county jail facility on U.S. Highway 80 in the “next few days,” adding the county has the money to pay for the purchase of the land.

However, it will also require the board of supervisors to seek a bond issue to construct the new facility.

For several years, the county has been looking at building a new jail facility to house city and county inmates to replace the current 100-year-old jail.

George also said the board of supervisors are doing everything they can to make sure Clear Creek Golf Course, which has been having financial difficulties, remains open.

He said the supervisors are working with parks and recreation to “create and promote the golf course, but we must make some changes.”

“When you start losing money, you have to deal with it,” George said.

The parks and recreation department is expected to request an unbudgeted $65,000 from the supervisors during their regular meeting Monday at 9 a.m. on the third floor of the Warren County Court House.

Splash pad back open at the Art Park