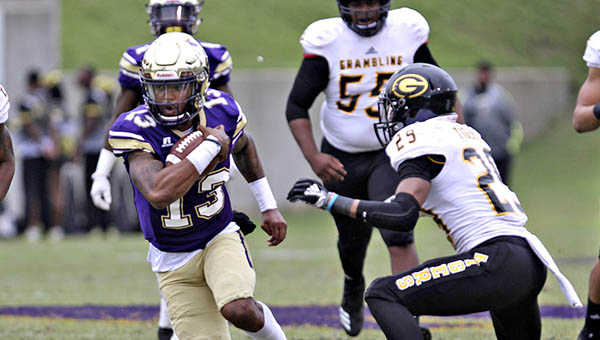 Alcorn State was the frontrunner all season in the Southwestern Athletic Conference, and on its awards list at the end as well.

Alcorn quarterback Noah Johnson was named the SWAC’s Offensive Player of the Year on Thursday, while Fred McNair reeled in the Coach of the Year award. The duo led the Braves to an 8-3 record and their fifth consecutive East Division championship.

Alcorn will play Southern University in the SWAC championship game Saturday at 3:30 p.m. at Jack Spinks Stadium in Lorman.

Alcorn running back De’Shawn Waller was the league’s Newcomer of the Year. The Braves put 10 players on the All-SWAC first team, their most since 1977.

McNair, who is in his third season, is the first Coach of the Year winner at Alcorn since Cardell Jones in 1992.

Johnson has thrown for 1,944 yards and 15 touchdowns, and rushed for 813 yards and seven touchdowns. He ranks seventh in the country in yards per carry (7.13) and 13th in completion percentage (63.4).

In just three seasons, Johnson ranks eighth all-time in Alcorn history in career touchdown passes (30), 11th in passing yards (3,845) and is approaching the all-time list in rushing yards (1,600). The Tampa, Florida native is a finalist for the Walter Payton Award that goes to the best player in the Football Championship Subdivision.

Waller, a native of Atlanta, earned his way into a starting role after beginning the season as the No. 3 running back on the depth chart. He leads the team in rushing with 871 yards and nine touchdowns, and has rushed for at least 100 yards in five of the last six games.

Mississippi Valley State’s Booker Chambers made the All-SWAC first team as a return specialist, and the second team as a wide receiver.

Chambers had 914 combined rushing and receiving yards and seven touchdowns, and returned two punts for touchdowns.