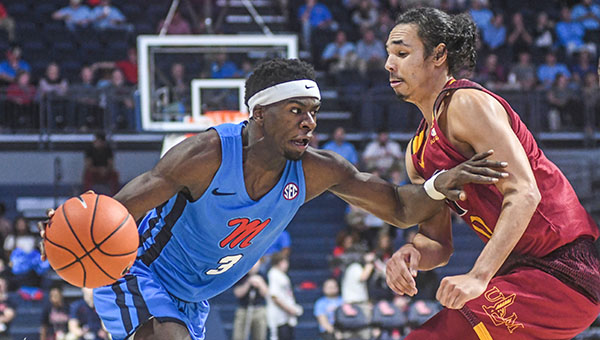 Blake Hinson scored 17 points for the Rebels (5-2), who have won four of their last five games. Terence Davis scored 15 points and added a game-high eight rebounds.

“We’re still a work in progress, but we held a good offensive team to 39 percent and that’s really good,” Ole Miss coach Kermit Davis said. “We also had 25 assists on 33 baskets and that’s exciting. It’s a big goal for us.”

Travis Munnings led the Warhawks (3-4) with 17 points. They trailed 44-31 at halftime and never pulled within double digits in the second half. JD Williams had 12 points and six rebounds.

“We didn’t win the toughness battle; credit Ole Miss,” ULM coach Keith Richard said. “We had some good moments, but we didn’t compete nearly enough in 40 minutes. But this was a good learning experience for us.”

The Rebels made 9 of 12 shots from the field to build a 21-9 lead in the first seven minutes.
Hinson, a freshman, had 14 points, three rebounds and three assists in 15 first half minutes.

Reginal Johnson scored 15 points and Kobe Wilson and Jael Scott had 10 each for the Braves (2-6), who shot 54 percent and 42 percent from distance and lead the Southwest Athletic Conference with an average of eight 3s per game.

Leading scorer Deshaw Andrews, averaging 14.4 points per game, scored nine for Alcorn State, which is 11-0 against non-Division I opponents under coach Montez Robinson.

When he talks about his college football career and the success he’s had in it, De’Arius Christmas is well aware... read more