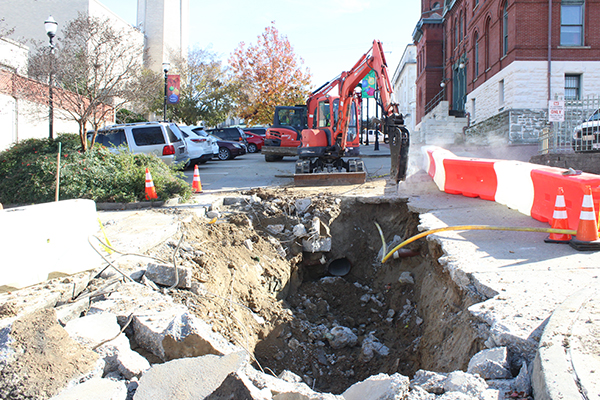 A Vicksburg sewer department employee uses a track hoe with a jackhammer attachment to break up pavement to help workers reach damaged sewer and storm drain lines that caused a sinkhole on Crawford Street. The lines are expected to be replaced by the end of the week. (John Surratt/The Vicksburg Post)

Crawford Street could be back open by end of the week

Damaged storm drain and sewage lines on Crawford Street could be replaced by the end of the week, public works director Garnet Van Norman said.

“If we can get the hole backfilled and can put slag over it, we may be able to reopen Crawford by the end of the week,” he said.

The city Friday closed Crawford between Washington and Walnut streets after a sinkhole was discovered in the street west of Walnut. Van Norman said the cause was a damaged 24-inch storm drain and a broken 6-inch sewer line.

Both are part of the drainage and sewer lines city workers had to replace at the intersection of Crawford and Washington in October and are more than 100 years old.

He said the lines were buried about 6 feet in the ground and will be replaced by city crews. A city sewer department crew was working at the area Monday removing pavement and excavating to the damaged lines.

City crews have also been working on replacing a 60-inch drain on Porter’s Chapel Road that was discovered in November. Van Norman said Porter’s Chapel is expected to be reopened Tuesday.