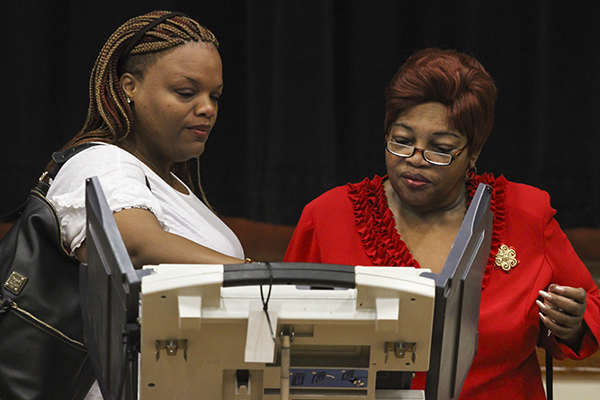 Ola Clark, left, and Geneva Jones vote in the 2018 midterm elections at the Vicksburg Auditorium Nov. 6. Voters chose two new local judges in the general election, as well as a constable who once held the position. (Courtland Wells/The Vicksburg Post)

Two new judges were elected to the bench and a former Warren County constable was returned to office as voters went to the polls Nov.6 to cast ballots in the general election.

Terrett credited Patrick “for the example and legacy that he has left for me to follow and build on, and I do look forward to serving the community as a circuit court judge and I want to thank the voters of Warren, Sharkey and Issaquena counties.

“I want to acknowledge Angela Carpenter for a great campaign, and I think this race brought the best out in both of us and I wish her well in her future endeavors.”

Soon after Carpenter conceded, Mayor George Flaggs Jr. announced he was nominating Carpenter for municipal judge. The appointment was approved unanimously by the Board of Mayor and Aldermen.

Carpenter was sworn in Monday in a ceremony at the municipal courtroom. Terrett will be sworn in Dec. 27 in circuit court. Both begin their terms Jan. 2.

In the race for county court, former assistant 9th Circuit district attorney Marcie Southerland received 7,046 votes to defeat county prosecutor Richard “Ricky” Johnson, who received 5,767 votes in the Tuesday general election. Judge Price is retiring from the bench and did not seek re-election.

“I am very excited,” Southerland said. “I am humbled by the support and the love of this community that has been shown to me throughout this campaign and actually through my 35 years of public service to Warren County.”

Southerland will be sworn in Jan. 1.

Troy Kimble received 2,055 votes to 1,637 for incumbent Mario Grady to return to office as Central District constable. Kimble was serving as constable and resigned to take a position with the Clarksdale Police Department and later returned to Vicksburg. Grady was appointed to fill Kimble’s uncompleted term.

“I’m just thankful for all the hard work people have put in in helping me to return to the office of constable, and seeing this process come to fruition,” Kimble said. “It’s great to be home with all that my family has been through. I’m ready to get back to work and continue where I left off.”

Time is running out to ship packages before Christmas arrives

Time is running out for those who are trying to ship gifts for Christmas through the United States Postal Service.... read more