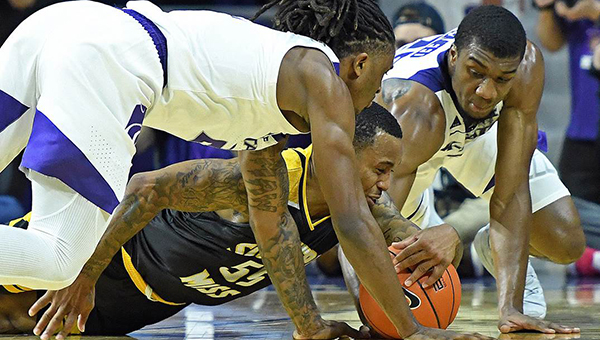 Southern Miss’ Tyree Griffin (55) fights for the ball with a pair of Kansas State players during Wednesday’s game. Griffin finished with 11 points and six assists, but the Golden Eagles lost 55-51. (Southern Miss Athletics)

Southern Miss’ Midwestern road trip offered an opportunity for some signature victories. So far, all it has netted is a couple of frustrating losses.

The Golden Eagles let a 16-point lead slip away in the second half on Wednesday and lost 55-51 to Kansas State.

It was their second straight close loss on the trip that continues Friday at South Dakota. After Christmas, Southern Miss (7-4) will play three straight road games to start the Conference USA schedule.

“There are 20 more minutes,” Southern Miss coach Doc Sadler said. “It is not even close to being over with. You know they are going to make a run and they did. Then we came back and had to show some toughness and we did. But you knew that they were going to come back.”

The problem on this trip for the Golden Eagles has been an inability to put together two good halves. They rallied from a 16-point deficit against Wichita State before losing 63-60, and on Wednesday dominated the first half against Kansas State before faltering down the stretch.

Southern Miss led 31-19 at halftime, and then scored the first two baskets of the second half to lead by 16 with 16:05 left in the game.

The 19 first-half points were the fewest Kansas State — which reached the NCAA Tournament’s Elite Eight last season — has scored in a half this season. The Wildcats missed nine straight 3s and were 8-of-26 from the field in the first half, but got hot in the second half.

Kamau Stokes scored 16 of his 18 points in the second half as Kansas State went on a 24-2 run. A fastbreak layup by Mike McGuirl put the Wildcats ahead 38-37 with 9:32 to play, and a jumper by Barry Brown pushed the lead to six 90 seconds later.

“We came out with energy in the first half and we were making shots. They just locked us up on defense in the second half,” said Southern Miss’ Cortez Edwards, who scored a game-high 18 points.

Southern Miss closed within 53-51 when Dominic Magee grabbed an offensive rebound, got fouled and made both foul shots with 10.4 seconds to go. The Golden Eagles quickly fouled Brown, but he knocked down two more free throws to restore the Wildcats’ four-point cushion.

Southern Miss finished 7-for-33 from 3-point range and only shot six free throws. Magee’s two free throws in the final seconds were the only two the team attempted in the second half.

“I thought the first half we did everything but you have to give them credit for the second half,” Sadler said. “You hold a team to 55 points and you have to win. We were 7-of-33 from the three-point line and did not get to the free throw line, so give them credit. They made some plays down the stretch that we did not make.”

Aric Holman also had 19 points for the Bulldogs (10-1), who rallied from a 12-point deficit early in the second half. Quinndary Weatherspoon made 14 of 15 foul shots on his way to 18 points, and Nick Weatherspoon and Reggie Perry each had 12 points.

Peters also had eight assists and two steals. The 6-foot point guard is 24-for-39 from beyond the arc over his last four games.

In the last four games, Mississippi State has made 59 of 110 shots from 3-point range.

Mississippi State faces Wright State at the Mississippi Coliseum in Jackson on Saturday.