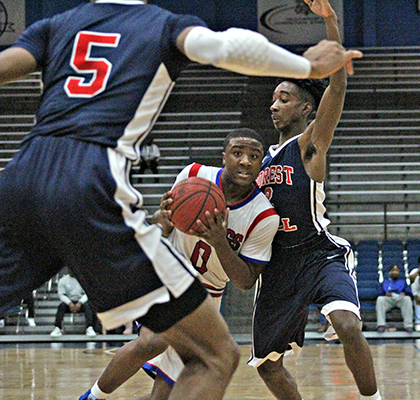 JACKSON — The goal and primary focus for Warren Central, as always, is on the region games and tournaments that define the season in January and February.

Before they get there, however, the Vikings finished December on a very good note.

The Vikings won three consecutive games, including a 57-52 decision over Forest Hill on Friday afternoon, to reach the boys’ championship game of the Pepsi/JPS Holiday Tournament for the first time.

“I thought coming in we had a lot to be thankful for in terms of playing the right way and really competing hard now. I’ve always felt that the talent was there. It’s just the parts coming together,” Warren Central coach Bruce Robinson said after the win over Forest Hill. “I think the more it went on, the more important it becomes. When you’re in a championship you want to win it, so winning (the semifinal) is important and so is competing and winning the next one.”

Warren Central (7-8) entered the JPS Tournament having lost four straight games, all by 10 points or less, as it navigated a difficult early-season schedule. It won close games against Murrah and Wingfield in the first two rounds of the tournament and then scratched out another nailbiter against Forest Hill — avenging a home loss from earlier this season — in the semifinals.

P.J. Mims hit two 3-pointers during a game-opening 10-2 run that propelled Warren Central to a lead it never relinquished. The Vikings led by 12 entering the fourth quarter but saw it get as close as two, at 54-52 on a 3-pointer by Rodreekas Bush with 1:20 remaining, as Forest Hill made one last push.

The Patriots, however, missed their last five shots — four of them 3-pointers — and Warren Central scored its last four points at the free throw line to hang on.

“That’s huge to be able to play solid defense, and then to make your free throws and get through that, we needed that,” Robinson said. “We did everything we could to let them back in it and not to win it, but that’s to be expected. We came over in a timeout and told them let’s just toughen up and we’ll be all right, and they did.”

The Vikings also got some solid guard play that had been missing during the early part of the season.

Mims hit four 3-pointers and scored all 12 of his points in the first half. Point guard Daniel Smothers scored 10 points, and Jalen Glass scored eight of his 10 points in the second half. Glass also converted baskets on several offensive rebounds, had a key layup with two minutes left that halted a 12-2 run by Forest Hill, and split a pair of free throws with 8.8 seconds left to ice it.

“Some of those shots were in and came out, but he brings much more than shooting,” Robinson said of Glass. “He’s energy, he’s a shot blocker, he’s a rebounder defensively and offensively, he takes charge. He’s pretty much our do-everything guy. He’s probably the glue that holds us together.”

Robinson also had high praise for Smothers, a 6-foot sophomore who recently took over as the starting point guard and had a good week running the offense. Smothers’ 10 points were a season high, and he capped it off by hitting two clutch free throws with 33.8 seconds left to make it a two-possession game at 56-52.

Smothers scored nine points in the first-round win over Murrah and six against Wingfield.

And, the Vikings hope, it’s just the beginning of something special. The Region 4-6A opener awaits after New Year’s, at home on Jan. 4 against Greenville. Three of the next four games are within the region, including a rematch with Provine Jan. 15 in Vicksburg.

“That’s exactly what we needed, was a springboard coming into January. That’s what we talked about,” Robinson said. “We had some issues that we’ve taken care of, but it’s moreso the guys. After Brookhaven (a 54-44 loss on Dec. 20), as we’re in the locker room and looked in their eyes, I could tell they were tired of losing. Even though we were losing, it was always, ‘Guys, we’re better than this.’ The schedule helped us out. We always would tell them we’re better than this, and now just to get that win and get some confidence and momentum is better than steroids in sports.”

JACKSON — Warren Central played its kind of game — slow and methodical — and had a heck of a... read more