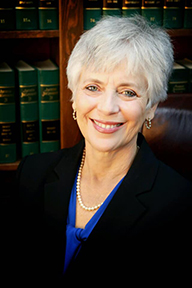 Southerland will be sworn in as county court judge

Marcie Southerland will take the oath of office as county judge Wednesday in a 10 a.m. ceremony in the county courtroom on the second floor of the Warren County Courthouse.

She was elected Nov. 6 to succeed County Judge John Price, who retired from the bench.

They are replacing former assistants Southerland; Angela Carpenter, who was named Vicksburg municipal judge; and Bert Carraway, who was hired by the U.S. Attorneys Office in Jackson.

Southerland, 64, served 17 years as Warren County Northern District Justice Court judge, and in 2014 was appointed an assistant district attorney for the 9th Judicial District in 2014. She has also had a private practice.

She has served as county prosecuting attorney, a special youth court prosecutor and special youth court judge, special master for the 9th Judicial District Chancery Court, where she presided over civil commitment cases until 2012, and served as board attorney for the Warren County Board of Supervisors.

She currently serves on the board of directors for the Mississippi Prosecutors Association. She is a member of the Port City Kiwanis Club and is involved in various community organizations that work together to help youth.

She has three children, Lee Ann Stuart, Matt Southerland and Branan Southerland, all of whom live and work in Warren County. She has nine grandchildren and one great-grandchild.

By Gabrielle Terrett The Vicksburg Post Studying to become a certified public accountant is pretty stressful, but try also being... read more