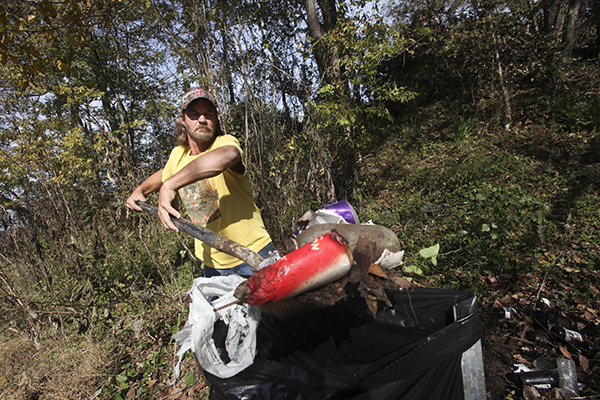 Shannon Gilmore places a scoop of trash into a bag during the cleanup of the Fort St. Pierre site in November. Around a dozen volunteers joined together to remove the trash and debris spread around this historical site, which will have a dedication ceremony Friday. (Courtland Wells/The Vicksburg Post)

The Fort St. Pierre Tercentenary Planning Commission will hold a ceremony Friday to dedicate a Mississippi Historical Marker commemorating the 300th anniversary of the fort’s establishment in Mississippi.

The program begins Friday at the Southern Culture Heritage Center Auditorium, 1302 Adams St., followed by the dedication of the marker on Mississippi 3, near the site of the fort, which is on the National Register of Historic Places.

Shuttle buses will take people from the center to the dedication site beginning at 10:30 a.m. Mayor George Flaggs Jr. will officiate at the unveiling.

Built in 1719 on a site near Mississippi 3, north of the Redwood community, Fort St. Pierre and Fort Rosalie in Natchez were built to deter English traders from moving in the Lower Mississippi Valley and challenging the French sphere of influence.

People interested in attending the ceremony should RSVP by calling 601-636-5010.

Marcie Southerland took her oath of office as county court judge Wednesday before a packed courtroom that included her family,... read more